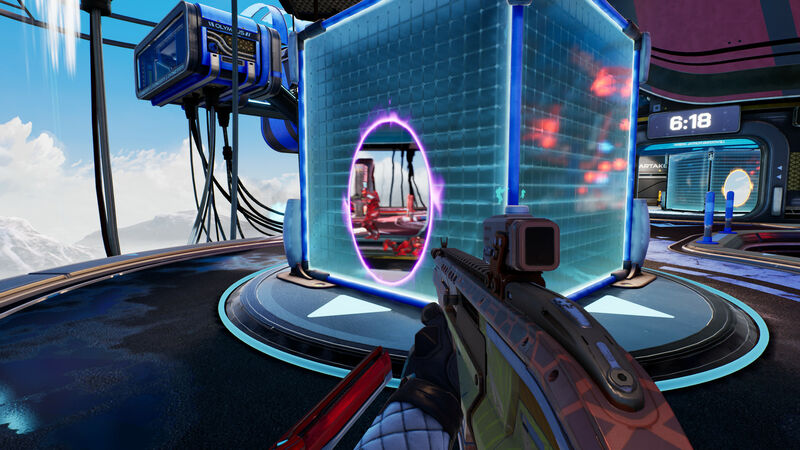 3.8
Splitgate developer 1047 Games is ending development on the free-to-play portal shooter and will be turning its attention to a new project set in the same universe. The company broke the news to Splitgate players this week by confirming that the next big update the game gets will be its last major patch. The game will remain online with active servers and will get small updates, but the majority of 1047 Games' attention will be on whatever the next Splitgate-esque project is.

In a blog post addressing the plans to wind development down and move onto a new project, 1047 Games described its currently work on Splitgate as "bailing water" while keeping people happy and "trying to turn our boat into a rocket ship." Recounting the game's journey from college project to a shooter able to compete with AAA games in terms of attention from players, the developer said it's ended up spending lots of time trying to rebuild old parts of the game while creating new content. Instead of continuing that cycle, 1047 Games said it's "ending feature development of Splitgate" and is turning to something new.


"We're turning our attention away from iterative, smaller updates and going all-in to focus on a new game in the Splitgate universe which will present revolutionary, not evolutionary, changes to our game," 1047 Games said. "It will be a shooter, it will have portals, and it will be built in Unreal Engine 5. Oh, and it will be free."

This news probably comes as a surprise to players given that the game still has an active community, is only in its second season, and is still considered to be in beta form as well. 1047 Games shared an FAQ to likely get ahead of the questions players might have and said that a "town hall" would take place on Friday at 11 a.m. PT alongside a Reddit AMA immediately afterwards at 12 p.m. PT.

As for things players have amassed so far in Splitgate, 1047 Games said skins won't be transferable to the new project but reassured players it's looking into a way to reward people for their time spent in the first game. Players will still be able to acquire cosmetics and such in the future as well with a new, free battle pass planned to launch on September 15th. Splitcoin is sticking around in Splitgate, but there's no word yet on if it'll be implemented or carried over to the next game.

No further details were shared pertaining to whatever the next game is. In response to an FAQ topic asking when we'd learn more about it, 1047 Games said "not for a while."

sad for it to be ending. The game looks awesome to play

I haven't played it yet, and looks like I won't be able to now ffs

Uzi In my opinion this game was a huge flop and I'm not surprised they're ending development. Even though it was a free-to-play game, I never once found it to look enticing enough to download it.

Numbers don't lie, just because you didn't download it doesn't mean it's a flop lmfao

Facts. Splitgate is a very underrated game with so much potential that they are even making another game based on the same universe. These kids are just typing whatever comes out their ass to boost their post count.

Uzi In my opinion this game was a huge flop and I'm not surprised they're ending development. Even though it was a free-to-play game, I never once found it to look enticing enough to download it.

Numbers don't lie, just because you didn't download it doesn't mean it's a flop lmfao

This actually don't look to bad

In my opinion this game was a huge flop and I'm not surprised they're ending development. Even though it was a free-to-play game, I never once found it to look enticing enough to download it.