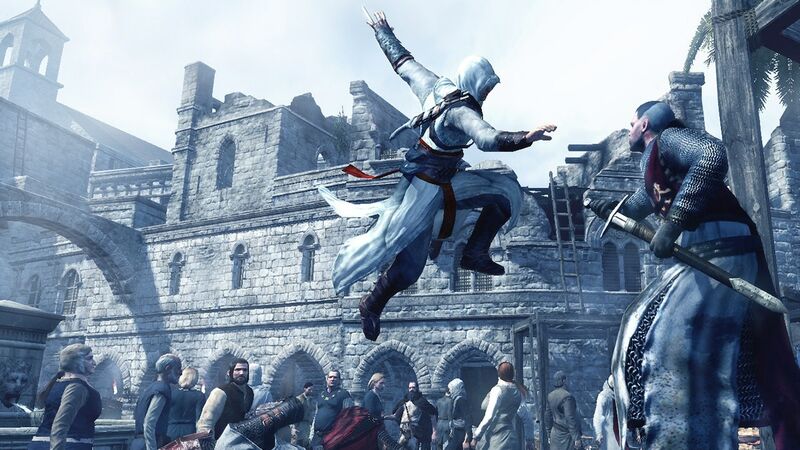 3.8
Assassin’s Creed 1 may be getting a full remake as new leaks regarding the rumoured Assassin’ Creed: Rift, the spin-off from Assassin’s Creed: Valhalla, suggest Ubisoft’s long-term plans for its stealth, open-world RPG series.

The leaks begin with a French YouTuber, j0nathan, who has regularly posted about Assassin’s Creed information and updates in the past. Handily translated on the Twitter account Rebs Gaming, the leaks suggest that Rift is in fact a codename for the next AC game, and the actual title will be Mirage. As has already been speculated, it will take place in Baghdad between 860 and 870 AD, and feature Basim from Assassin’s Creed: Valhalla as the playable character.

Ubisoft’s goal with Mirage is apparently to return to the basics of the series, removing some of the more RPG-based elements such as dialogue trees, gender selection, and a levelling system, to supply a game that focuses more on the Assassin’s Creed stealth gameplay fundamentals. Mirage will allegedly launch in Spring 2023.

This information has been partially corroborated by Bloomberg reporter Jason Schreier, who has previously reported on leaked information regarding both Assassin’s Creed: Rift (or should that be Mirage now?) and Ubisoft’s rumoured service-style game Assassin’s Creed: Infinity, which is rumoured to be set in Japan, and will be updated progressively over a number of years, similar to GTA Online.

“A person familiar tells me parts of this new Assassin’s Creed leak are true,” writes Schreier, “such as the name and the other stuff Bloomberg has already reported: spring 2023, Baghdad, back to AC basics.” Schreier also explains that other parts of the leak, according to their source, are “not true”, specifically hints that Mirage will take place across “multiple locations”.

The original leaks from j0nathan, however, also describe what may be Ubisoft’s plans for a remake of the original Assassin’s Creed. Supposedly, Mirage is being used as a kind of test run for some of the remake’s features and assets, with the back-to-basics style of the Valhalla spin-off serving as the foundations for a remake of the original 2007 game. Assets used in Mirage will be recycled into the AC1 remake, with the remake itself releasing as part of Mirage’s season pass bundle.

On the one hand, this would make sense, as the Arabic and Middle-Eastern architecture present in ancient Baghdad could plausibly be retooled to suit the 1st century Syria of the original Assassin’s Creed. Ubisoft is also currently running its Assassin’s Creed celebration event, which began in June, and has focused on a series of weekly spotlights for each game in the series – the original game will be featured last, at the beginning of September, with Ubisoft originally promising that this will coincide with a “very special event” at which it will reveal “the future of Assassin’s Creed.” A remake reveal could therefore be on the cards.

However, as Schreier notes, Mirage was initially intended as a DLC for Valhalla, before becoming a full game. The idea of an Assassin’s Creed 1 remake being attached to a former DLC, as DLC itself, is a little unusual. “Seems dubious to me,” says the Bloomberg reporter. “Rift is DLC-turned-game. I’m sceptical that it’s getting its own DLC, too”. Fortunately, September 10, when Ubisoft is scheduled to hold its next Forward event, is right around the corner, so we hopefully won’t have to wait too long for some more solid information.

And if this is a success, they will remake the others

Remake or remastered ?? Cuz I think the game was just fine.