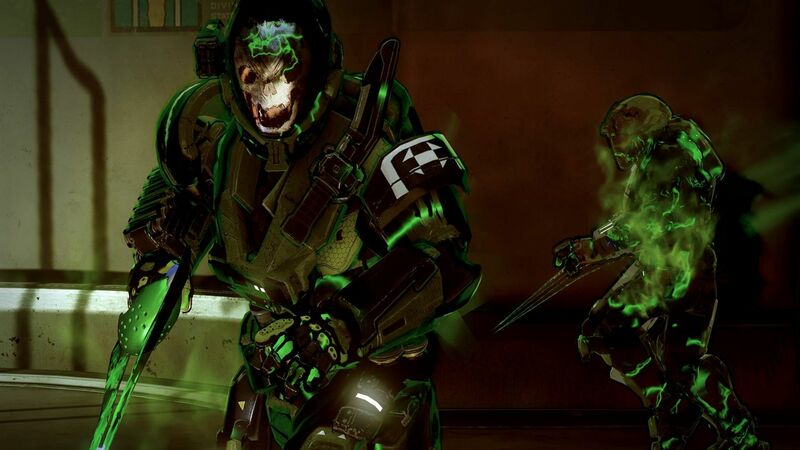 3.5
The delayed launch of Forge mode for Halo Infinite has proven to be particularly painful for Halo's most dedicated fans. Forge mode allows Halo players to create their own game modes and experiences, and it has played a key role in Halo's popularity since Forge's introduction in Halo 3. A recent leak has allowed Halo Infinite players their first taste of the new Forge, though, and creators are already getting to work. The latest creation has re-introduced the popular Infection mode to Halo Infinite.

The custom Infection mode was shared via the Artifice YouTube channel, where a creator has spent the past two weeks sharing their experience with Halo Infinite's Forge mode. The Infection video, which captures just two minutes of gameplay, offers a glimpse of the high-intensity action found in Infection, both from the perspective of a survivor and one of the infected. Suffice to say, it's the Infection that Halo players are familiar with and is an impressive example of the Halo Infinite Forge's potential.

Infection, for those who aren't familiar, is a game mode first introduced in Halo 3 following the success of a custom Halo 2 game mode named Zombie. The game starts with most players assigned an uninfected role and their goal is to survive attacks from the infected. If an uninfected dies to an infected, they respawn as an infected. The infected's goal is to kill all remaining uninfected. If they die, they respawn and can hunt again.

There is evidence that an official Infection game mode is being worked on by 343 Industries, but nothing has been confirmed yet. Some Halo Infinite players believe Infection could be introduced for Halloween, but these players also acknowledge that it's best not to make assumptions about Halo Infinite's future at this point in time. Regardless of whether 343 officially supports Infection or not, it's safe to assume Infection will be supported in custom games when Forge launches, at the very least.

As for how Artifice or any other creator is managing to work in Halo Infinite's Forge yet since it hasn't been fully launched, a complicated workaround has been discovered. A recent test flight offered an early look at Halo Infinite co-op. Dataminers also discovered this version of Halo Infinite included a working Forge, which can be accessed by testers with a relatively straightforward workaround. Artifice and others are making the most of that leak.

If there's a takeaway from Artifice's Infection video, it's that Forge can't launch soon enough. Halo Infinite players have been hungry for a diverse range of multiplayer content and 343 Industries has struggled to provide it. As soon as Forge launches, game modes of all kinds will be available to play. Here's hoping Forge news for Halo Infinite will arrive in the coming months.

Will our Maze be happy with this news?

We used to do this back in the halo 3 days.

this is sweet and would be so fun