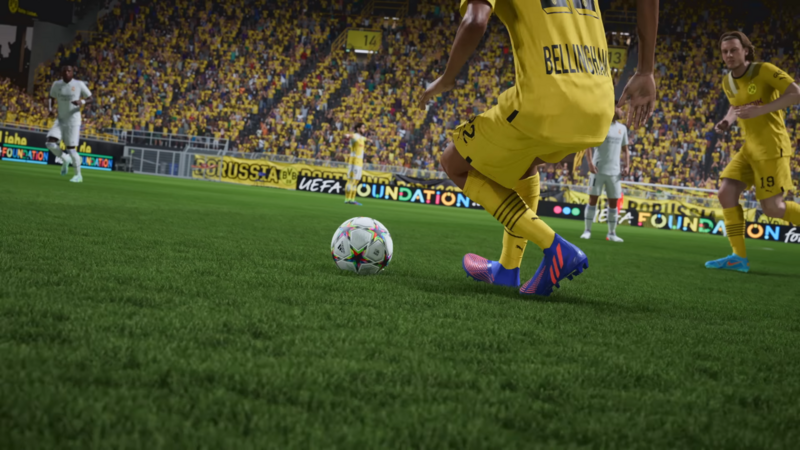 4.1
FIFA 23 fans have spotted a pretty hilarious EA blunder in new footage of the game. FIFA 23 is one of the most interesting games of the entire series for a number of reasons. As of most recently, the game had its cover revealed which has a female player on it, a first for the series. EA has also stated that it won't be including Russian teams or clubs in FIFA 23 as a result of the war in Ukraine. It's also EA's last game with the FIFA license, meaning it will take on a whole new name in 2023. As for what other changes that will bring remains to be seen, but it's certainly interesting for fans of the series.

However, EA let something through in some recent gameplay which has made the publisher the subject of some humiliation. Newly released FIFA 23 footage includes a character t-posing in the background and although you likely wouldn't see it if you didn't know it was there, once you see it, it's hard to unsee. Reddit user Raks- noticed the incident and pointed it out to other fans who have been having a field day with the mistake. Of course, these things happen and likely isn't anything to be concerned about, but it doesn't make it any less funny to see a pro athlete in a super expensive video game just t-posing in front of a goal while other players aggressively battle for the ball.


If you're unfamiliar with t-posing, it's the standard pose that is used for 3D models before animating them. If you watch any behind the scenes footage of motion capture, you'll usually see the actors entering a t-pose stance when they begin or end a scene. This incident also reminded people of when a video of NBA Elite 11's demo went viral. In the video, player Andrew Bynum randomly struck a t-pose mid-game at half-court after receiving the ball. The game was canceled shortly after, although it's likely for more reasons than the now infamous "Jesus Bynum" meme.

This is absolutely shocking

get it together FIFA

this is just wild come on EA

Wow this is funny and they let it get in accidently.

What are they copying fortnite emotes now ? Lol