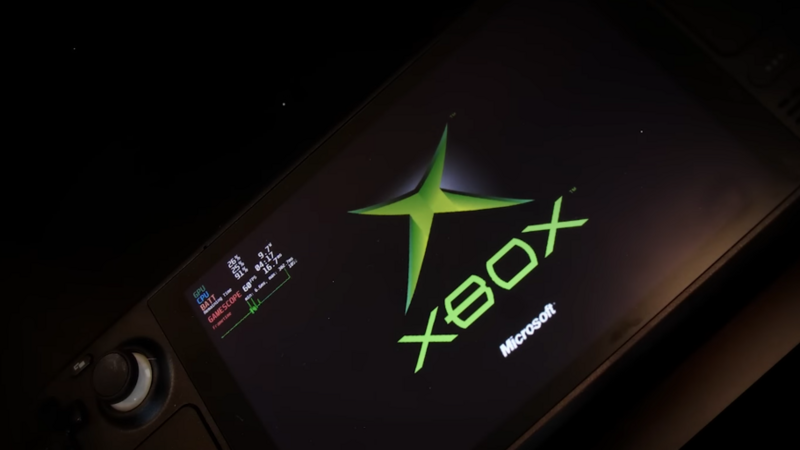 4
Months after release, the Steam Deck is still showing people that it's more than just a handheld games console. Despite Valve's past failed attempts at making hardware products, the company's latest endeavor not only proves that it's possible to basically carry around a mobile PC, but it may have pushed things along in the portable gaming industry. One of the things that makes the Deck unique is just how versatile it is. As well as being able to install Windows on it, users can also extend their library of games through the use of emulators.

That's what the YouTube channel Modern Vintage Gamer has done. The latest video shows that it's possible to install an original Xbox emulator on the Steam Deck and play some classic games. It's worth saying at this stage that this isn't necessarily a hack, as such. The host says that there are some emulators available already, but there can be additional steps required outside of simply downloading and installing one. The emulator of choice for Modern Vintage Gamer is Xemu.

Titles that were chosen for testing include classic original Xbox games such as Halo, Ninja Gaiden Black, and TimeSplitters 2. In general, it seems that OG Xbox emulation works pretty well on the Steam Deck, with a lot of the games tested maintaining a smooth 60 fps. However, while titles like Jet Set Radio Future can run well, it did have major framerate issues after "pressing the boost button." Halo also had one slight issue in that upscaling the visuals even slightly would cause a drop in frames. Additionally, there were some fps and visual issues with other games, but in general, Xbox emulation on the Steam Deck seems like a great way to play these classics.

With the Steam Deck now supporting more than 4,000 games and this number rising all the time, there are already a ton of things for users to play. Add onto that emulation, and a game library is increased significantly. For those concerned about the framerate issues mentioned, the problems experienced by MVG are allegedly down to the emulated games rather than the Deck itself.

Given the sheer nostalgia many will feel for the original Xbox console, using the Steam Deck to relive some of these older games may only increase interest in it. It's by no means a perfect device, but Valve has evidently put a lot of time and energy into creating something that doesn't just compete in the mobile gaming market, but is a versatile machine that can help gamers relive their youth once more.

This is absolutely amazing.

All Steam deck owners must do this to theirs too

damn this is throw back lol I miss it so much

Hell yeah. Og Xbox and ps2 had such good games !

If you have the deck this is a must have !