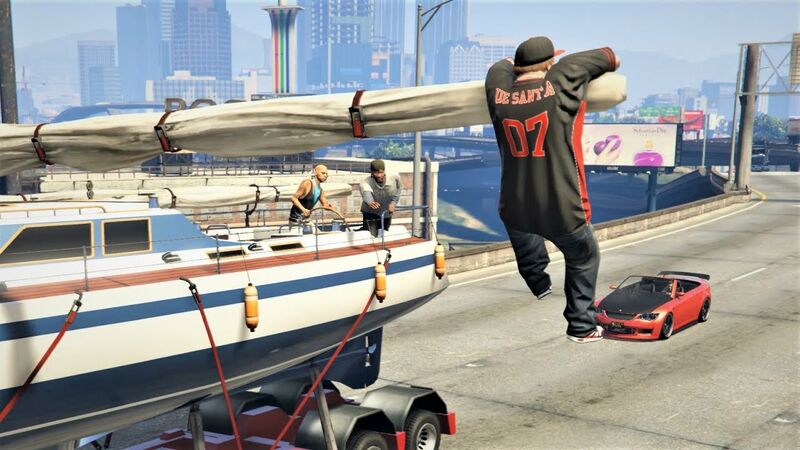 4.5
GTA V looks very sleek and smooth, incredible really for a game of its size. With so much detail and so many moving parts in Los Santos, it’s remarkable how Rockstar – which, by the way, is apparently very busy on GTA 6 – manages to make everything look so organic. But buried inside any videogame, beneath the pretty, functioning facade, there lies a bewildering mess of metaphorical tape, plasters, and chewing gum holding everything together, and Grand Theft Auto V, like Fallout 3 with its infamous train hat, is no different.

In a post on Twitter, GTA V player LucasIsPersonal shares footage from one of the game’s early missions, Father/Son, where Michael is chasing after the thieves who have stolen his yacht, and are speeding away with it strapped to the back of a truck down the Los Santos freeway.

All seems normal, until you notice, hovering above the robbers’ vehicle, a floating, inverted, 18-wheeler truck cabin, following them along like some kind of intensely weird halo.

As the chase continues into a tunnel, another truck appears on the opposite side of the road, skimming over the pavement, clipping through oncoming traffic, and again, pointed at the boat thieves. You can see it for yourself, in a longer version of the clip available on YouTube.

So what’s going on? Well, first of all, those trucks are normally meant to be invisible – LucasIsPersonal has jumped into GTA V’s code and “unhidden” them. In the Father/Son mission, at various times, you can choose to switch to a “cinematic” camera, which follows the chase from the angles represented by the, normally invisible, trucks. So, they’re probably being used as some kind of disguised, in-game camera mount.

But why trucks? Why not just normal props? There are a few theories. Since the invisible trucks are the using same models as the truck being driven by the boat thieves, it’s possible that the developers decided to perch the cinematic camera on top of them, because they’re an asset that’s already loaded into the game, and therefore would save on memory. Remember in the old GTA games, when you would spend ages looking for a Cheetah or a Banshee, then once you got one, suddenly they’d be everywhere? Same principle – one something is loaded into the game, it saves on space to simply reuse it, so why bring in a separate asset for mounting the camera when you can just lock it onto a truck model that the game has already processed?

Another theory, proposed by LucasIsPersonal, is that, if it were trying to track alongside the freeway chase, GTA V’s regular camera system would be unable to keep up and would desynchronise. Attaching the camera to a “solid” prop, however, somehow enables it to ramp faster or slower depending on the pace of the action.

Perhaps Rockstar itself will be good enough to tell us precisely what’s going – it might also want to let us know about those hints we’ve spotted regarding GTA 6 and Vice City. Until then, however, this remains another neat, if slightly bizarre and inexplicable, example of game development trickery.

WTF? That is funny as F*ck LMAO

haha and of course it's in the first couple missions crazy

what in the world lol ive never seen that