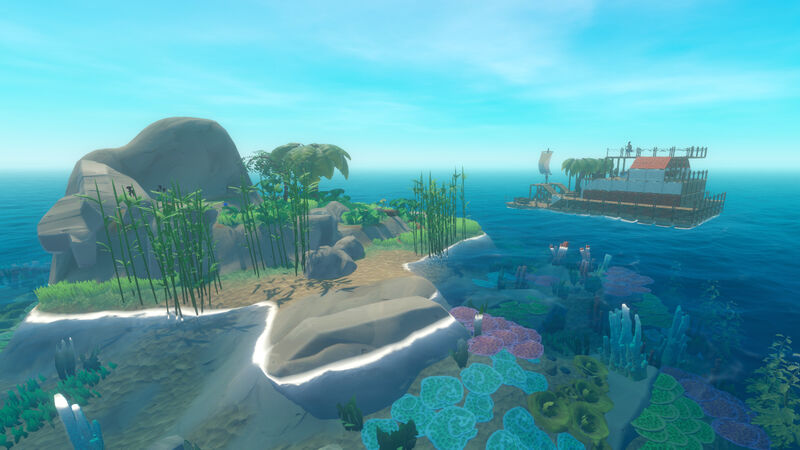 4.3
The Steam Summer sale is underway, and one of its big winners so far is shark-infested ocean survival game Raft, which has just reached a new peak player count thanks to a discount and the game’s transition to full release. Developer Redbeet Interactive released its version 1.0 update, ‘The Final Chapter,’ on June 20, saying that they “consider Raft to no longer be in need” of the early access label.

Now, spurred by the official release and a discount in the summer sale, the co-op game is listed as one of the top sellers on Steam, and SteamDB lists the peak player count at over 100,000 concurrent players and climbing at the time of writing. The new update adds three major destinations to explore and an overhaul to the game’s story to provide a “clear and engaging narrative experience,” along with added voice acting for all the game’s story notes.

If the sharks weren’t terrifying enough, several new beasties are out there in the watery depths and among the various locales. Most notably (and perhaps most terrifying) of all is the toothy anglerfish, but there are also swarms of bugs, polar bears, hyenas, and more mystery creatures to be discovered.

In addition, the Final Chapter update introduces several new Raft characters who you can play as once you track them down in-game, and a trading post system that allows players to sell off fish for trade coins and turn their unneeded resources into Raft Trash Cubes that can be used to purchase useful survival and combat items, as well as cosmetics.

There are plenty of other new items and such to discover in the full release, too, including a variety of alternate outfits for the game’s playable characters.

If you’re getting stuck in the Steam summer sale event, one player found a crafty solution to complete it in just a few minutes. Final Fantasy VII remake recently hit the storefront and has also been very successful. On the other hand, Fall Guys is no longer available on Steam – but the Steam version will continue to receive full support from Epic.