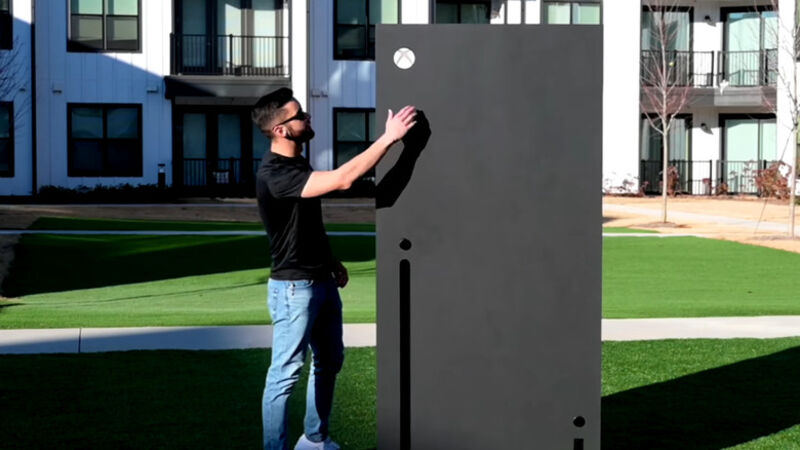 Calling it "the world's largest Xbox Series X" isn't just hyperbole on the part of Pick, either. The device officially holds the Guinness World Record for The Largest Xbox Console at 6.82ft x 3.41ft x 3.41ft. According to the brief look at the record itself, this was awarded on December 9, 2021, so while there is a possibility that an even bigger one has been built since then, it certainly seems unlikely. You can check out the full video from Pick about building the device for yourself below:

The full video is worth a watch to see just how dedicated Pick was in recreating the Xbox Series X in a huge form factor. It's basically just a giant wooden structure that houses an actual Xbox Series X within it, but Pick went the extra mile to make it so all of the buttons function like they actually would on the smaller console. There's even the bright green glow that the console is known for as well as the vents on top despite the fact that basically nobody will actually be able to look at them in daily life.

After building it, Pick shipped the giant Xbox Series X to ZHC for customizing -- the same YouTuber that customized the world's biggest PlayStation 5 -- before it arrived at its ultimate destination of the YMCA Youth and Teen Development Center in Atlanta, Georgia. The whole ordeal from creation to delivery is covered in Pick's video.

As for the actual, small Xbox consoles, the Xbox Series X and Xbox Series S are currently available for $499 and $299, respectively, if you can find either of them in stock anywhere.

I've got a few questions here lol is it basically just a huge Xbox case and inside there's just a normal Xbox?

Fair play on him creating this, and for it to actually work

lol, and I thought the normal one was big..