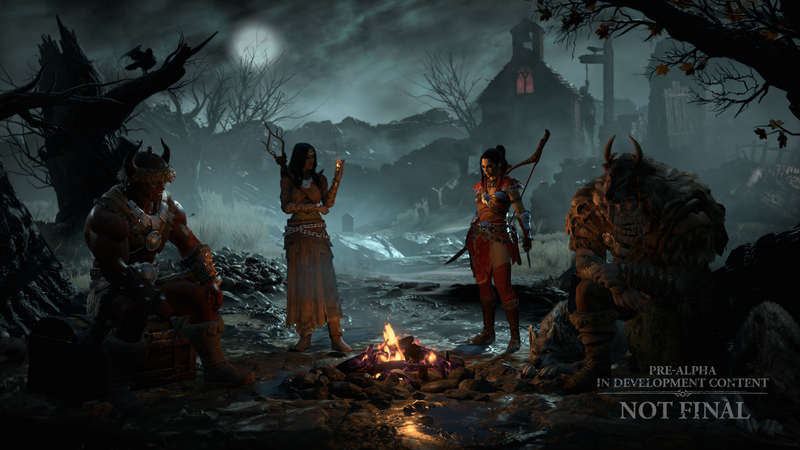 4.2
Diablo IV is learning big lessons from previous Diablo games, including how the game approaches legendary items and its endgame Paragon progression system.

In a recent GameSpot interview, game director Joe Shely and Diablo franchise general manager Rod Fergusson elaborated on what lessons Diablo IV takes from previous entries in the series. One big one, aside from Diablo IV's overall darker tone and look compared to Diablo III, is how it handles legendary items.

Shely said the ability to extract powers from legendary items (previously announced in a Diablo IV quarterly update) and put them in other items "really opens up the ability to customize your gear." Fergusson echoed that sentiment.

"That has transformed the game," Fergusson said. "This is true. We don't talk about that enough. In previous games, you would pick up a shield that had this thing that would make, like, 'Can summon two more skeleton mages.' And you're like, 'Oh, I have to keep this…My build needs those two extra mages.' And eventually your level would outpace it, and I don't want to give up the shield. I'm going to carry this shield even though it's weak, because I want this ability."

That's not the case in Diablo IV, where players will be able to move legendary powers around via an NPC called the Occultist once an item with better stats has been discovered. Players will have the ability to turn rare items into legendary ones as well.

"And so that idea of being able to hold onto your build and be able to truly customize your character by taking legendary powers, extracting them from one thing and imbuing them into another, that fundamentally changes the build system," Fergusson said.

The ability to extract legendary powers and place them into new items is present in the recently released Diablo Immortal, giving fans an idea of how the system may play out in Diablo IV. Blizzard added a system to Diablo III in 2015 where players could extract and then equip up to three legendary powers using the Kanai's Cube, but the powers themselves could not be transferred to other items.

Another big change for Diablo IV is the Paragon system. Unlike Diablo III's Paragon system, which could almost be leveled up infinitely, Diablo IV's Paragon Board system will have 100 levels, according to Shely. Rather than simply raising stats with each Paragon point, as in Diablo III, players will have bigger decisions to make in Diablo IV's endgame about how to further progress their character. Certain tiles on the Paragon board may benefit some skills over others, meaning even if two players are playing the same class, the skills and bonuses they've selected on their Paragon boards could be wildly different.

"Each of those squares could be plus five strength or a different ability or something that enhances your skills," Fergusson said. "And so you're able to click these different boards together and make your own path through. That's one of the things we really like about Diablo IV. Even if Joe and I both were creating a Barbarian, and even if we both wanted to be Whirlwind Barbarians as an example, we could still have completely different builds."

Following the loss of its previous director in 2021 after various lawsuits and investigations alleging a "frat boy" workplace culture at Activision Blizzard, Diablo IV is set to release in 2023 and will support cross-play and cross-progression between PC and consoles. Blizzard recently revealed new details about Diablo IV's fifth and final launch class, the Necromancer.

Looks like they're done well by transforming the game