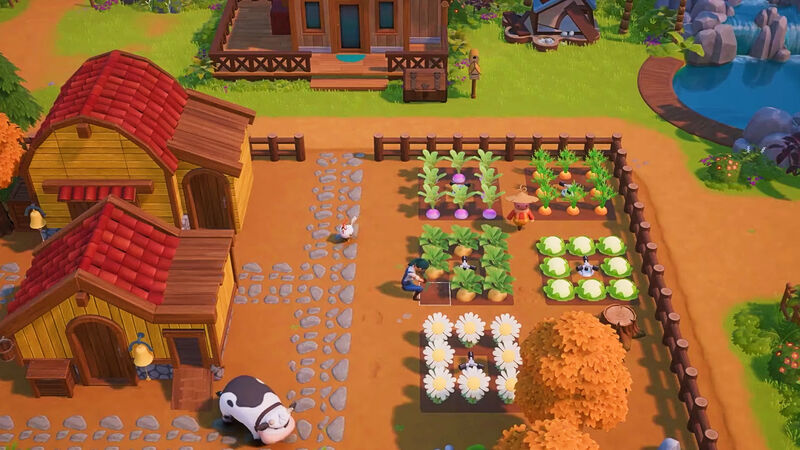 4
Stairway Games has announced that their Stardew Valley-like Coral Island will be entering early access in October with a new trailer at the IGN Summer of Gaming show. The farming game garnered plenty of attention in 2021 when it smashed through its initial Kickstarter funding goal of $70,000, and reached a total of over $1.6 million USD raised. The life sim game is due to launch on Steam Early Access on October 11.

Coral Island’s huge surge in funding has meant the team at Stairway Games are planning a huge number of additional features, minigames, and characters for the game – as well as adding increasingly more of Coral Island’s inhabitants to the dateable roster, because what is a Stardew-like without the opportunity to get flirty with the locals? There’s even going to be an underwater Merfolk Kingdom, featuring 20 merfolk, its own seasonal festival, unique merfolk questlines… and, of course, even a little subaquatic romance.

These additional features are all mapped out on Coral Island’s Kickstarter page, including a promised endgame mechanic called ‘island hopping’ set to arrive after the game’s 1.0 release, which will see players building a ship and travelling around to different islands in a new biome around Coral Island.

So far Coral Island’s devs promise over 50 people to meet around the island, 20 of whom have already been confirmed by Stairway Games to be romanceable. In addition, you can set out your farm with over 75 different varieties of plantable crops, plants, and fruit trees – ranging from the everyday staples such as potatoes, carrots, and strawberries to more exotic fare including banana trees and dragon fruit.

In addition, there’s plenty of animals that you can either meet around the island or raise as livestock – from cows, sheep, and llamas to the likes of luwak and peafowl. There’s also fishing and an extensive diving mechanic that allows you to clean up the sea bed around the island to create a home for rare fish (including Tilapia and Luo Han Flowerhorn) and ocean kelp – as well as visit the aforementioned Merfolk kingdom.

Much like Stardew Valley, there’s also the opportunity to go cave mining for resources – though you’ll have to fend off some aggressive beasties to get your hands on the rarer finds! There’s plenty of fashion to dress your character up in, community projects to undertake, over 70 recipes to learn and cook, seasonal festivals to partake in, and of course a faithful companion to join you on your farm – with dogs, cats, monkeys, and foxes already announced and even more promised to come. You’ll also have to contend with the oil drilling Pufferfish Corporation, who are scheming to buy up the island for their own nefarious needs.

Looks all fun. I'll give this a go when it's released in October