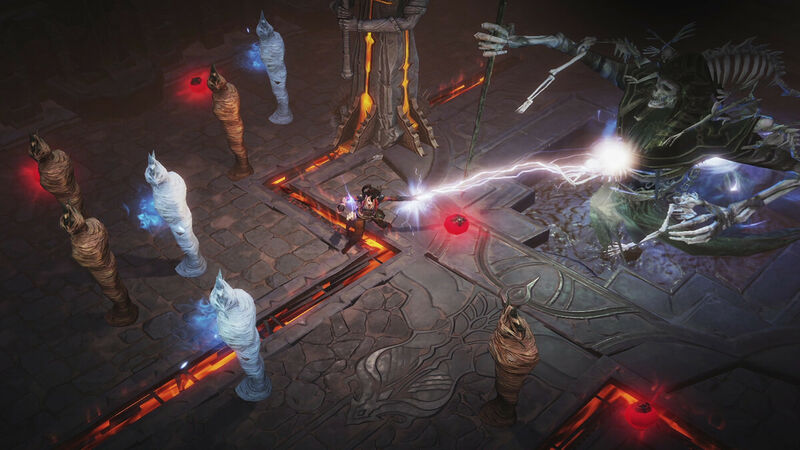 4.4
Amid criticism of Diablo Immortal’s approach to microtransactions, the game’s director has suggested that some negativity around the game is “based on misinformation”.

Months prior to the Blizzard game’s release, director Wyatt Cheng said: “In Diablo Immortal, there is no way to acquire or rank up gear using money.”

And while it may be factually accurate that “gear” itself can’t be purchased with real money, following the game’s release last week some players have labelled Cheng’s comments disingenuous.

That’s because Diablo Immortal lets players use real money in a bid to acquire powerful Legendary Gems, one of three progression pillars alongside regular gear and XP level, which can be used to upgrade a character in the post-game.

It’s been claimed that the highest tier Legendary Gems can’t currently be earned by players who don’t pay for them with real money, and it’s been estimated that fully upgrading a post-game character would cost up to $110,000 worth of gems.

And players can’t even purchase Legendary Gems outright. Instead, they are dropped from Legendary Crests, which are the game’s loot boxes.

Over the weekend, Cheng was asked on Twitter what had changed since his pre-release comments about players not being able to buy gear. “Or are the gems not considered gear?”

What happened in 4 months? Or are the gems not considered gear? pic.twitter.com/d39rnQadk9

The post you made come across and disingenuous and disappointing to people that have been fans of blizzard for such a long time, and it makes it matter a lot less important if you cant "literally" buy gear when you "basically" can buy power anyway

"You can only upgrade your gear with $$$ once you reach the free quota of the day. [...]it's currently almost $12 to just simply even try to upgrade one piece of gear as the "failure rate" is 50/50. " I think it's pretty clear with the game out that this was not the case.


Another user asked Cheng why he took the time to respond to criticism of the game’s microtransactions.

They wrote: “King doesn’t justify charging $100 for a pack of lives in Candy Crush, why does Blizzard feel it needs to be apologetic for a game that cost $50m+ and 6 years to make?”

To which Cheng responded: “<3 thanks for asking.


Negativity surrounding the game has resulted in Diablo Immortal being ‘review bombed’ on Metacritic, which at the time of writing means its user score is just 0.7, the third-worst score in Blizzard‘s history.

The only Blizzard games to receive a lower user score to date are 2020’s Warcraft III Reforged (0.6) and 2021’s World of Warcraft Classic: Burning Crusade Classic (0.4).

Wow it's just so much money to waist to get it all.

Game takes 110k or 10 years to max game free. What a disgrace

You can straight up buy stuff right away with platinum or play the gamble game with crests. There's no way anyone can word themselves out of this one lmfao. I mean a streamer paid $10,000 and literally got nothing maxed out.