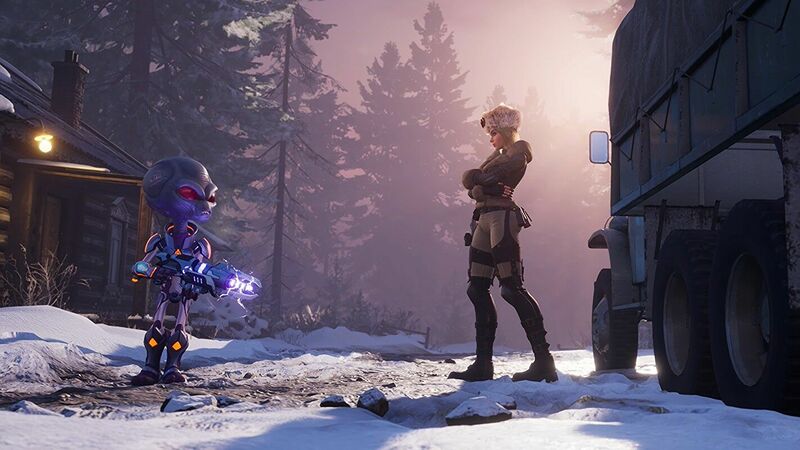 3.7
The remake of Destroy All Humans! 2 is coming out at the end of August with THQ Nordic officially announcing the game's release date this week alongside a new trailer and more looks at the game. Destroy All Humans! 2 – Reprobed will be out on August 30th, the publisher said, following a reveal from September 2021 and after the first game was remade before that. The game will benefit from a number of enhancements and is made in Unreal Engine 4 and is developed by Black Forest Games, the same group that remade Destroy All Humans!

THQ Nordic's release date trailer for the remake of the second Destroy All Humans! Game can be seen below and includes some scenes that should look familiar to those who played the second game but should also be looking a bit better now thanks to the enhancements present.

"Crypto is back with a license to probe," a preview of the new remake reads. "The alien invader returns, groovier than ever. Experience the swinging '60s in all its chemical-induced glory and take revenge on the KGB for blowing up your mothership. You'll have to form alliances with members of the very species you came to enslave.

A site set up for this remake listed some of its features as well as some screenshots from the remade version of the game. You can check those out here with the remake highlights seen below, too.


The most funkadelic version of the comedy classic ever created
Rebuilt from scratch in Unreal Engine 4 by the makers of Destroy All Humans! (2020)
All Crypto skins from the first game and more
Change paint jobs on your flying saucer

One important detail about this remake to keep in mind is that it won't be available for the PlayStation 4 nor will it be released on the Xbox One. The game is only coming to the PlayStation 5, Xbox Series X|S, and PC platforms, THQ Nordic confirmed in its latest trailer.

Will deffo get this when I get a PS5

Awesome can't wait to see my buddy crypto again. Destroy All humans 2 was my favorite. Also really happy to see it for Xbox series x and PC.

I'm excited for this game, I was just thinking about it the other day!