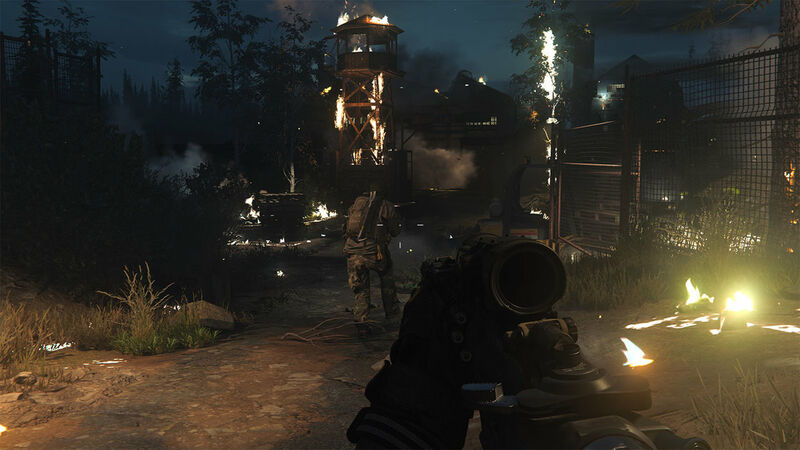 4.5
Call of Duty: Modern Warfare 2 is digging up the past to kick off a "new era" for the series, and it seems that era still includes plenty of leaks.

Call of Duty has always been one of the industry's biggest and leakiest ships, and the run-up to the new Modern Warfare 2 is springing a new leak almost every day. It wouldn't be a new Call of Duty without short gameplay leaks seemingly filmed with a russet potato, quickly hit with a DMCA notice, and then mirrored in equally terrible quality through a Streamable embed on Reddit. If you squint hard enough, you can almost make out the new gun inspection feature that's apparently on the way.

As Eurogamer spotted, a recreation of the map for the new DMZ mode, which has been positioned alongside traditional multiplayer, was shared earlier this week. It caught the attention of serial leaker Tom Henderson, who's contributed to the rapidly growing pile of Warzone 2 leaks as well, highlighting alleged points of interest and apparent overlap with DMZ.

The same source also recently clarified some earlier reports regarding Pro perks returning in Modern Warfare 2. Like everything else, this remains officially unconfirmed, but it seems Pro perks are indeed making a comeback, so go scrape the dust off your favorite 2009 loadout.

Even esports team FaZe Clan is getting in on the leak parade, amplifying a report from Henderson claiming that Warzone 2, the new battle royale accompanying Modern Warfare 2, will revisit the classic maps Highrise, Terminal, Quarry, and Afghan indirectly through DMA. Other leaks claim Warzone 2 is "more like Blackout" than the Warzone we know today. We've still got several months to go until Modern Warfare 2's launch, so pull up your rubber boots and prepare to wade through some more leaks.

But yeah... Just for additional context, the images/videos are from around Nov/Dec of last year... Not recently. So looking on the brighter side, it looks pretty good for a game that still has a year of dev.

"Modern Warfare 2 is already leaking all over the place" :: Login/Create an Account :: 10 comments

Need better footage than this crap

Hoping for another leak with better quality

the leak is recorded on a nokia flip-phone?

More than likely. They can't get away from it now. People buy what they can't work for.

can't wait for another BR/microtransaction game

is that a leak or battlefield 3

Don't care about leaks, wait for trailers and gameplay