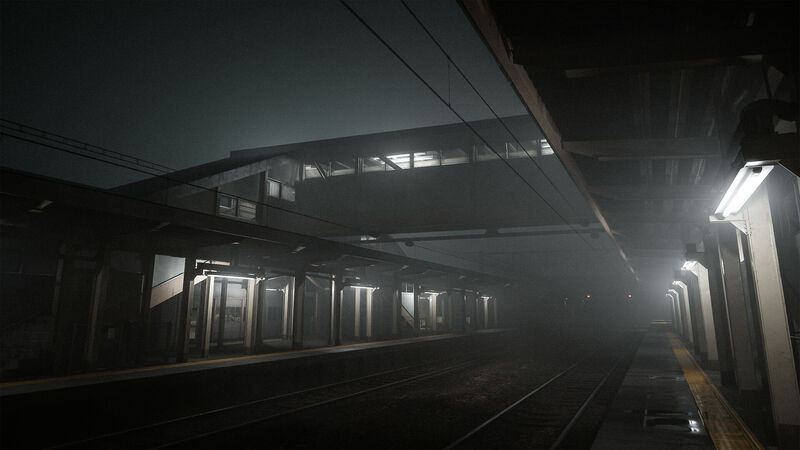 4.5
Regardless of what one thinks of Epic Games as a company, few will deny that its Unreal Engine 5 is impressive. Officially launched for all developers on April 5th, the engine lets users create highly detailed environments in 4k resolution with hundreds of thousands of polygons.

Developers have yet to release any full games in Unreal Engine 5, with 2021’s The Matrix Awakens being more of a tech demo. Still, developers are already using Epic’s engine to achieve impressive things. One of these can be found in a recent viral video showcasing a photo-realistic Japanese train station.

The short clip is about two and a half minutes long, excluding credits, and showcases a digital recreation of the Etchu-Daimon train station in Imizu, Japan. It’s formatted in portrait to give the impression of someone recording the train station with a smartphone. Created in Unreal Engine 5 by 3D environment artist Lorenzo Drago, also known as subjectn on YouTube, the video showcases part of the train platform and attached pedestrian bridge at various times of day and under different lighting conditions. The high resolution, incredible detail, impressive reflections, great lighting effects, excellent sound design, and natural camera movements combine to give viewers the impression of live-action video rather than a digital environment.

Drago’s creation is an impressive display of his talent and what developers can achieve using Unreal Engine 5. Notably, he created the digital space without using the engine’s Nanite system. Nanite lets developers take any 3D capture of real-world objects and import them into Unreal Engine 5. It also automatically calculates the level of detail and draw distance, automating a process that artists would otherwise have to do manually. According to Drago, he did almost all of the work himself, only using outside assets for the foliage.

While Drago either couldn’t or chose not to employ Nanite, he still used Unreal Engine 5’s Lumen lighting software. Named after the unit of measurement for light output, Lumen automatically calculates shadows and reflections, eliminating the need for artists to create custom lightmaps. This function allows designers to develop responsive, high-resolution, and photo-realistic lighting effects more effectively and in a fraction of the time.

While the area shown in the video is very small, consisting of a small section of platform and part of a stairway, it is still a breathtaking display of 3D modeling. Of course, the developers at Epic Games deserve a lot of credit for creating Unreal Engine 5 in the first place. However, it’s still impressive what Lorenzo Drago did with the software, and his viral video offers a glimpse of gaming’s near future.

I remember playing games like GTA San Andreas and saying to myself "yeah this is the height of gaming, graphics can't get any better" then i seen GTA 5 on the 360 and said the same thing now i look at this and i'm like "if games look like this, its only going to get better"

Like think 15 years from now, we'll have AAA titles in VR that look even crazier than this. Games are already on massive scales but think 10+ years from now, games will have budgets up to 500m+ (considering GTA5 took 265 million) I better be able to walk into any house i see.

I'm also afraid of the price of games in the future, GTA 7 costing 140$ including MTX

At first i was like nah these are playing with us here saying it is like real life and this is actually a game, Genuinely thought it was a video outside in real life until they went inside then u can see its a game, Unreal graphics.