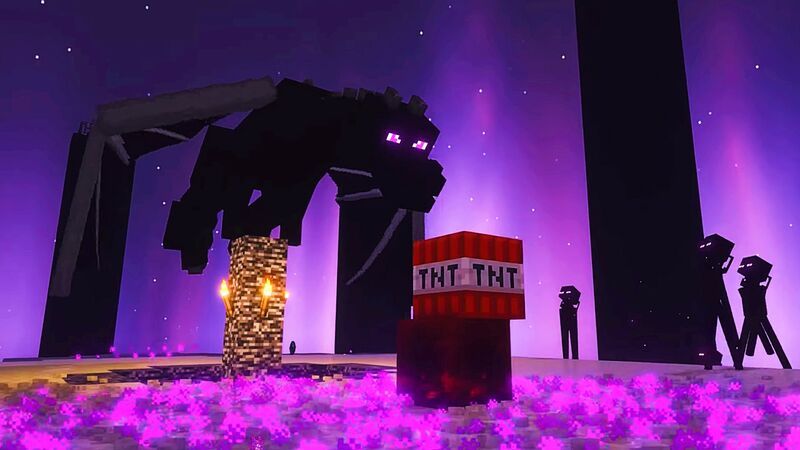 3.3
Minecraft challenge runs are a staple of the crafting game‘s creator community. It’s generally not what we’d call a violent game, but you do end up killing a surprising number of enemies in a normal playthrough – whether that’s the zombies that bother you at the beginning, farming items from creatures in the Nether, or just slaying the Ender Dragon – and so a pacifist playthrough is trickier than you might think. You enact a lot of violence without ever really planning on it.

You don’t have to though, and we know that now because of SwitchBackMongo, a Minecraft YouTuber who mainly plays in Hardcore. SwitchBackMongo decided that the cycle of violence had to end and embarked on a journey to defeat the game without killing any Minecraft mobs. Well, mostly. They technically didn’t kill anything, but the explosive beds – that’s right – they used around the Ender Dragon definitely did.

Anyone who’s played Minecraft before will know that if you’re looking for resources, you end up having to defend yourself. When you’re deep in the crust of the overworld, skeletons, spiders, and creepers are all going to try and find and kill you, so just avoiding them is a fairly titanic effort. Even the simple act of grabbing some iron can get you into a fight or, y’know, killed. Remember, this is Hardcore, so death isn’t an option.

For SwitchBackMongo, the real sticking point was the Nether. More specifically, it was an enemy called a Blaze, which is the game’s only source of Blaze Rods. These are an essential ingredient in crafting the Eye of Ender, which leads to The End, making Blazes one of only two enemies which must die in order to ‘complete’ Minecraft. But does that mean you need to kill them?

SwitchBackMongo tries out a few methods of handling them in the video, including watching as an Iron Golem decimates fifty Blazes with no drops, before heading to Google like so many of us for an answer. Thankfully, wolves truly are man’s best friend, and they got the job done.

The whole run is a pleasure to watch because it’s a brand-new venture for the prolific Minecraft YouTuber, so they aren’t 100% sure of how to go about it. It’s rare to see a challenge run that hasn’t already been mastered, especially in a game that’s been around as long as Minecraft.