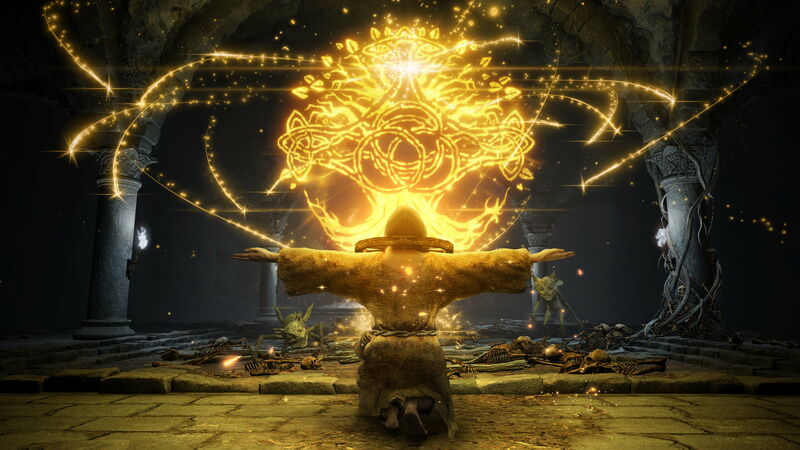 3.7
Shortly after Elden Ring came out, players discovered, somehow, that a few of the game's walls could be destroyed by hitting them roughly 50 times. We tested it ourselves, with 45 swings required on a wall in Volcano Manor, but it turns out this was a bug. The walls have been fixed in the latest patch, as has a certain especially deadly little enemy.

YouTube user Zullie the Witch tried the latest Elden Ring version 1.04 patch out to see if it fixed the not-illusory walls. It did, as they're now apparently indestructable. They didn't serve much purpose to begin with, as the Volcano Manor wall was simply another entrance to an easily accessible room. Of course, it still had us wondering if it was a secret From Software put there on purpose.

Additionally, Zullie confirmed the game's bleeding dog enemy type has been patched so it doesn't accidentally instant-kill you instead of simply knocking off a chunk of health via the bleed effect. If you get surrounded by these enemies, they're quite dangerous, but the bugged version was one of the deadliest enemies in the game when by itself.

Elden Ring patch 1.04 changed a whole bunch of stuff in the game, though it didn't have any major nerfs like previous updates. Incantations and sorceries have been adjusted, and the tutorial at the beginning has been made nearly impossible to miss. If you do still need some help and you're on PC, you can always try the Let Me Solo Her mod.

Oh darn!! Was gonna grab this game and do the glitches