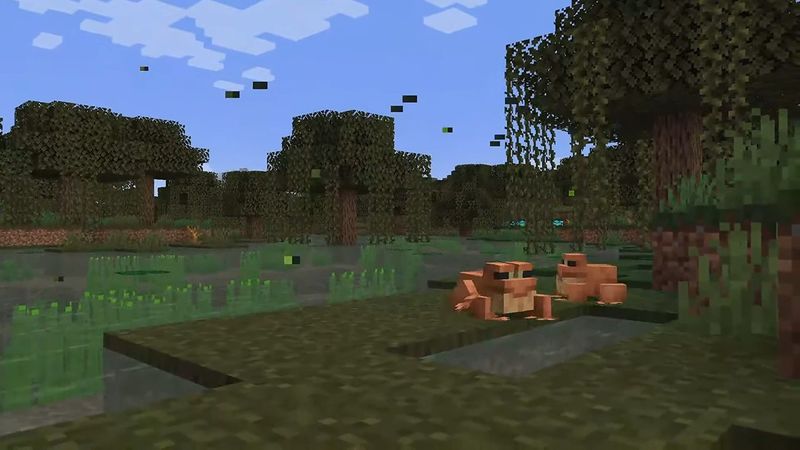 5
Minecraft Snapshot 22W11A is out now, and it adds a whole new biome, two mobs, new blocks, and 3D Directional Audio. There's a lot to unpack.

Firstly, there's the Deep Dark biome which is found underground, made up of the new sculk block. Currently, no mobs spawn, but as the name suggests, it's darker than your usual cave. You'd best pack some torches. Then there's the new mobs - the frogs and tadpoles.

Tadpoles are found in water but if they manage to get out onto land, they'll quickly die. But if you keep them alive long enough, they'll become a frog and there are different frogs depending on the biome. You can get cold, warm, and temperate frogs. You can also fish up tadpoles with buckets, making them easy to move - that's perfect if you want to expand your aquarium. When they become frogs, they can jump, swim, walk on land, and defend you. In particular, they like to eat slimes and magma cubes. If they eat magma cubes, they'll drop a Froglight block, a new light source.

In our latest Snapshot, for Minecraft: Java Edition, we’re jumping with joy to bring you frogs! For you builders, we’ve got some of our newest blocks, including mangrove wood.

Read the full list of features, and find out how to give us your feedback:


The last time wood was added into the game was with the Nether update, bringing crimson and warped hyphae, but the last time wood was added to the Overworld was with dark oak. However, the snapshot has implemented mangrove wood which will be found in a brand-new biome in a later snapshot. You can use it like with any other wood to make boats, buttons, doors, fences, stairs, etc., but what's interesting about mangrove is that its leaves can be used to farm propagule.

Aside from that, Mojang has also added mud which can be found in the yet-to-be-added mangrove biome. It's essentially the Overworld's version of soul sand as you'll sink in it, but it can also be crafted by using a water bottle on dirt. You can then craft packed mud and mud bricks, adding a whole new variety of building blocks. Who knows what people will design now?

Loving the pics, keep up the good work

From the snapshot all look great !