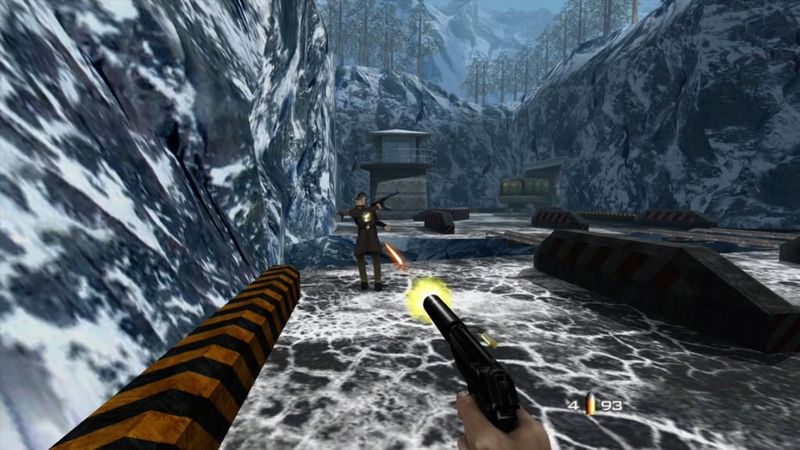 3.9
Speculation has increased around a potential official re-release for Rare’s GoldenEye 007, after Achievements were reportedly uncovered on Xbox Live servers.

TrueAchivements, a site that syncs and tracks Achievement activity, recently posted the full list of GoldenEye Xbox Achievements, said to come from live console servers, including artwork for each unlockable challenge.

The list also includes 1000g of Achievements, and not 200g as would have been planned for the version once planned for Xbox 360‘s Live Arcade.

According to the site, two users have unlocked GoldenEye Xbox Achievements so far; ‘BigSheep’ and ‘Xtinamcgrath’. The Gamertags appear to belong to Rare’s lead engineer James Thomas and community head Christina McGrath.

Last year it was confirmed that Microsoft had to shelve an already completed remaster of the classic N64 game for the Xbox 360, following licensing issues and miscommunication between license holders and a young team who rushed ahead to create it, despite a deal for the game having never been signed.

A working build of GoldenEye 007’s cancelled Xbox 360 remaster was leaked onto file-sharing sites in early 2021, allowing those with access to the files to play it via a modded console or PC emulator.

an Xbox Achievement list for GoldenEye 007 has popped up https://t.co/7oaXNAq0Gr pic.twitter.com/OlTia6hZal


If Goldeneye 007 does receive an official re-release on modern platforms, it would be a huge step in preserving a game that has been battling against licensing issues for years.

This is largely due to rights to the James Bond license, as well as the likeness rights to Pierce Brosnan, Sean Bean, Robbie Coltrane and more. This would either have to be renegotiated or removed from a potential rerelease.

“It’s kind of bittersweet,” co-director Chris Tilston said of seeing the GoldenEye remaster leak into the public domain. “It means people get to see the work that was done, but it also masks some of the cockups that went on behind the scenes.”

Co-director Mark Edmonds added: “The thing that I find strangest is, why now? Why leak it after all this time? Someone must have had this for all those years. It just seems strange to me.

“When I first heard about it, it almost made me think, are Microsoft leaking it on purpose for some reason? (Laughs) I don’t think that would make sense, but it does make you wonder.”

I hope it does get a release.