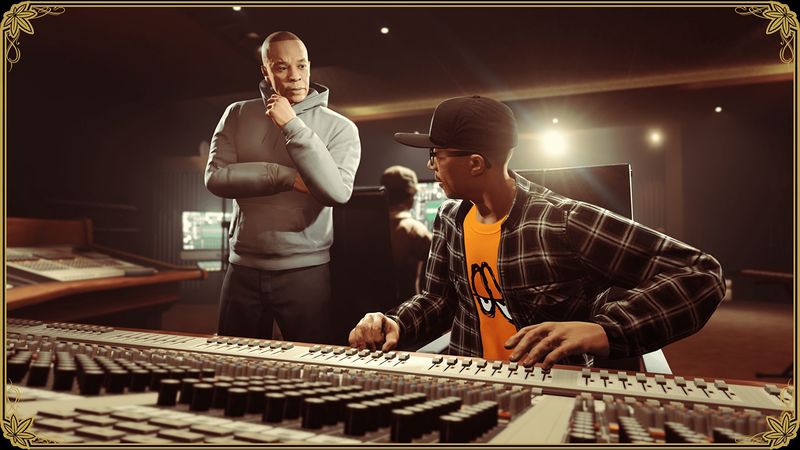 4
GTA Online developer Rockstar Games has announced a significant new story for the video game called The Contract that features the return of Grand Theft Auto V's Franklin Clinton and, perhaps most notably, the story will include Dr. Dre in a significant way. More details are set to be revealed soon as The Contract is set to release on December 15th.

According to the announcement and trailer, Franklin has started up a "celebrity solutions agency" called F. Clinton and Partner that ultimately gets involved with Dr. Dre. The whole thing seems to revolve around Franklin and his Los Santos crew trying to track down a phone Dr. Dre lost on the way to Cayo Perico last year that includes unreleased music. You can check out the trailer for yourself below:

In the years since he and his accomplices knocked over the Union Depository, Los Santos hustler Franklin Clinton has been making moves of his own.


According to Rockstar Games, the narrative bit of The Contract isn't all the update is adding. It will also include "an eclectic new radio station from some very special guest hosts, huge first-of-their-kind updates to existing radio stations including a ton of new and unreleased exclusive tracks from Dr. Dre and a heavy-hitting line-up of artists, plus additional opportunities for agency work including choice hits for players willing to get their hands dirty, plus new weapons, vehicles, and much more."

As noted above, The Contract is set to release in GTA Online on December 15th. Grand Theft Auto Online itself, which is often referred to as simply GTA Online, is the online multiplayer component that was released alongside Grand Theft Auto V back in 2013. It continues to receive free updates that range in size and significance but maintains a large playerbase.

I think it's cool that they added Franklin to online content, it can never be too late for GTA 5 I suppose...