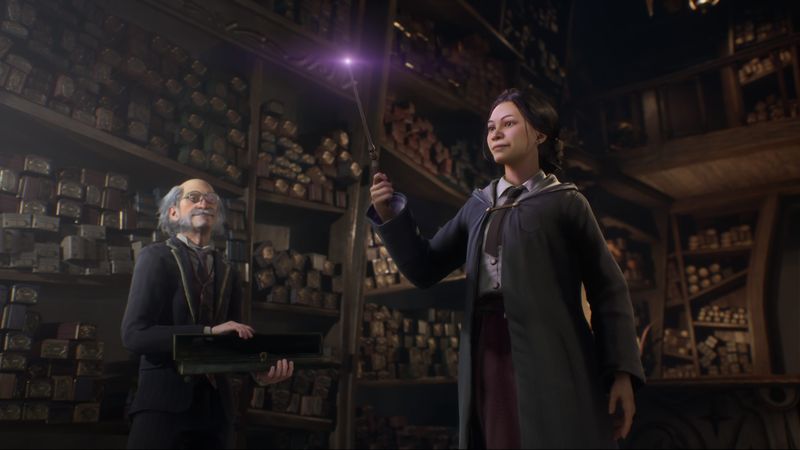 4
It has been more than a year since the official reveal trailer for Hogwarts Legacy. Besides early leaks and information that regarded the game's delay, Hogwarts Legacy's latest rumor of a release after the next Fantastic Beasts film has teased fans of the franchise who are waiting for more information on the game.

Otherwise, only speculation and rumors have been shared without any acknowledgement for updates. Fan-requested features and mechanics for gameplay have been shared since, such as a social simulation similar to Persona 5 or Fire Emblem: Three Houses. Rather, a reputable leaker whose previous teases offered subtle hints at Hogwarts Legacy news has resurfaced once more, and this time with an explicit nudge toward news in the near future.

Millie Amand, a video game analyst and PlayStation insider, has shared a post that simply says "Soon..." with an associated GIF of Hogwarts Legacy's key art. Amand is a fairly new name to the scene of reputable leakers in the video game industry, but their name is substantial enough at this point from previous statements that players are staying attentive to their updates. Amand was allegedly the individual who surfaced the Marvel's Wolverine leak, for example, and several other Sony-related rumors that have come to pass.


But whether Amand's reputation precedes them or not, it may be of interest to players who are looking forward to Hogwarts Legacy to pay attention here. Amand's previous remarks also include a tease for Geoff Keighley's The Game Awards, where something may be shown that would excite them. Because The Game Awards is set to premiere on December 9, fans who are following Amand's Hogwarts Legacy murmur assume that the news or update that is teased here will be made apparent at the awards show.

If Amand is proven correct, then fans may expect Hogwarts Legacy to be shown more fully with an update in December. According to Amand, Hogwarts Legacy was meant to be "shown at PlayStation Showcase but assets weren't ready for show." However, Amand's teases also insinuated that the game would appear at Sony's latest State of Play, but that proved untrue as well.

Initially to be shown at PlayStation Showcase but assets weren’t ready for show.


Regardless, The Game Awards seems like an opportune time for Avalanche Studios and Warner Bros. Interactive's Portkey Games to share more about Hogwarts Legacy. With The Game Awards set to air on December 9, fans won't have to wait long to find out.