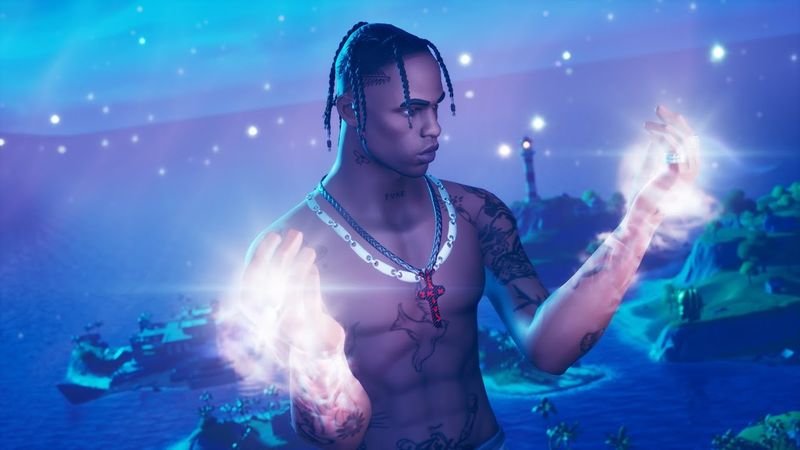 4
Travis Scott has collaborated with Fortnite on numerous occasions, with the battle royale featuring a ton of content based on the rapper. After the deadly November 5 Astroworld concert, Fortnite has removed its plans to sell the Travis Scott emote.

On November 5, eight people died, and hundreds were injured during the first day of Travis Scott's Astroworld concert in Texas. In the wake of the tragedy, many have blamed Travis Scott for not stopping the concert accordingly so that people could receive proper help. In 2020, Travis Scott performed an in-game Fortnite concert, another of the game's many events that players can experience, which also saw the release of a Travis Scott skin. Like most other skin releases, Fortnite also dropped a Travis Scott skin, titled "Out West," which originated from a popular TikTok dance to the song 'Out West' by JACKBOYS and Travis Scott, featuring Young Thug.

A new tweet by Epic Games suggests the removal of Fortnite's Travis Scott emote. "It’s known that the 'Daily' section of the Item Shop has been disabled," Epic Games starts in the post from its Fortnite Status account, notifying players that this is not some random occurrence. Epic Games continues, writing, "This is intentional and the 'Daily' section will return with the next Item Shop refresh." Although neither Travis Scott nor any of his associations are mentioned here, his "Out West" emote was supposed to be in today's 'Daily' Item Shop rotation alongside Astroworld's conclusion.


Following November 5's concert, Travis Scott canceled the second day of Astroworld. The decision to remove the emote was praised by many in the comments of the post. However, there are those who are confused why Epic Games did not just replace the individual emote instead of shutting down the Item Shop entirely. Fortnite has pulled emotes and other items in the past, like emotes being used without the permission of a gesture's original creator.

While Epic Games does not directly reference Travis Scott, it seems likely that this act in Fortnite is out of respect for the victims of the tragedy. It would have been more poignant of Epic Games to directly speak about the event, but the quiet closure of the emote still prevents it from being sold. A full response by Epic Games would probably consist of it removing Travis Scott entirely from Fortnite, or just stopping the rotation of his items in the shop. Emotes and other items rotate in Fortnite, with "Out West" being available on a monthly basis, so if the item reappears on December 8, fans will know Epic Games' stance.