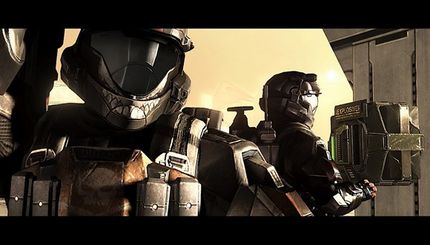 According to CVG, a handful of lucky gamers in France got their hands on a copy of Halo 3: ODST nearly a month in advance of it's September release date. It seems that some copies of the game were delivered early, and Microsoft states it is "investigating a very small breach in [its] distribution process." Furthermore, the company is looking at Live accounts with Halo 3: ODST activity and is planning to "take action against those we believe have procured copies of the game illegitimately."
Thankfully, those that were lucky enough to legally buy a copy of the game are in no danger. A Twitter update from Xbox Live's Stephen Toulouse notes that Microsoft "will not be banning legitimate customers from Xbox LIVE who play early."

I was talking to a lad who is friends with friel and he has it. He said it was brillaint but much harder

im not jealous either i dont really like the Halo series, like XMan said im more pumped for MW2 and other games

eh... not a fan. I was a fan for a while but I don't think Halo 3 had good replay value and I got bored. I'm way more excited for Modern Warfare 2.

I gave up on the Halo series after Halo 3. I loved Halo Combat Evolved and Halo 2, but Halo 3 and Halo Wars just sucked. This game looks really amazing, but then again so did Halo Wars and Halo 3. I am not that Jealous of those people at all. I just all the hype is true.

ok im totally jealous, that game looks really awesome and i have seen alot of reviews on it, also for the checking if some one cheated, they should do that for every game

Yeh i will rent it to try it out but i don't like halo just call of duty for shooting games, Even though France get it early im sure not too many people are bothered.

just like greenbird im only renting it.Im not a fan of Halo so 2 nights rent is as far as it goes

I'm not jealous of them getting it early. i'm not even going to buy the game. I will rent it complete the vidmasters, collect my recon armor and take it back :D