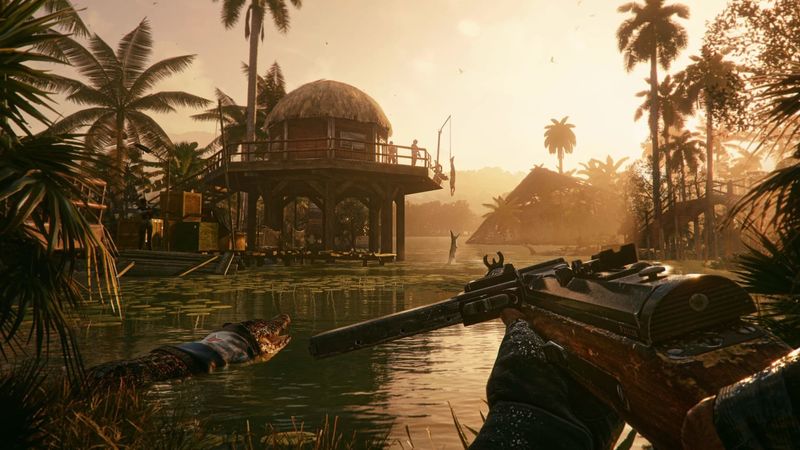 4
A new Far Cry spin-off may have been teased within Far Cry 6, as players are discovering. Hidden in the game are QR codes that, when scanned, seem to show a video for some sort of Far Cry battle royale or survival game – although when that will happen is another matter.

Far Cry 6 was released by Ubisoft last week and, despite definitely coming with some problems, at least offered a new open-world paradise for players to explore. Observant players who have been digging into Yara may have spotted QR codes in certain places, such as on some wooden crates.

As detailed by JorRaptor on YouTube (thanks The Loadout), scanning these codes with a phone in real life brings up some short teaser videos. The most cryptic of these shows a cartoon revolver chamber character, a map with various counters suggesting wildlife and multiple players, and an armoured cat attacking either a player or a soldier. The three red arrows suggest players in some sort of multiplayer mode, at least.

JorRaptor suggests this may be a battle royale, which is possible, but the emphasis on animals seems more in the style of a multiplayer survival experience. The map itself features a location called Sky Temple and ancient ruins, and brings to mind Far Cry 4 – the setting of which players will return to in an upcoming DLC for Far Cry 6, although that probably won’t have multiplayer.

It’s certainly possible this could be a tease for a new upcoming Far Cry project, although like the similar Watch Dogs 2 teaser for space game Pioneer it may never happen. We’ll have to wait and see, but we’re sure the announcement of a Far Cry battle royale game will go down just as well as Ghost Recon Frontline did.