3.8
Halo Infinite's next two beta tests were already confirmed for this weekend and the first few days of October, and now, we have a more detailed scheduled for the events. The next Halo Infinite multiplayer preview is scheduled to begin on September 24th at 10 a.m. PT where it'll be live for a couple of hours before returning that evening after a brief period of downtime. The rest of the first weekend of tests and the second weekend will follow a similar schedule with those who've received invites able to take part throughout the events.

Developer 343 Industries had originally said September 23rd would be the start of this weekend's multiplayer preview, but during the latest Halo Infinite stream, it was suggested that the timing could be slightly altered. The new plan is to have the pre-load option available Thursday evening before the multiplayer preview officially opens on Friday morning for people to take part.

The image below was shared by 343 Industries to serve as the schedule for the next two multiplayer previews. You'll notice that access to the flights will begin and end an hour before and after the actual matchmaking times start and finish. 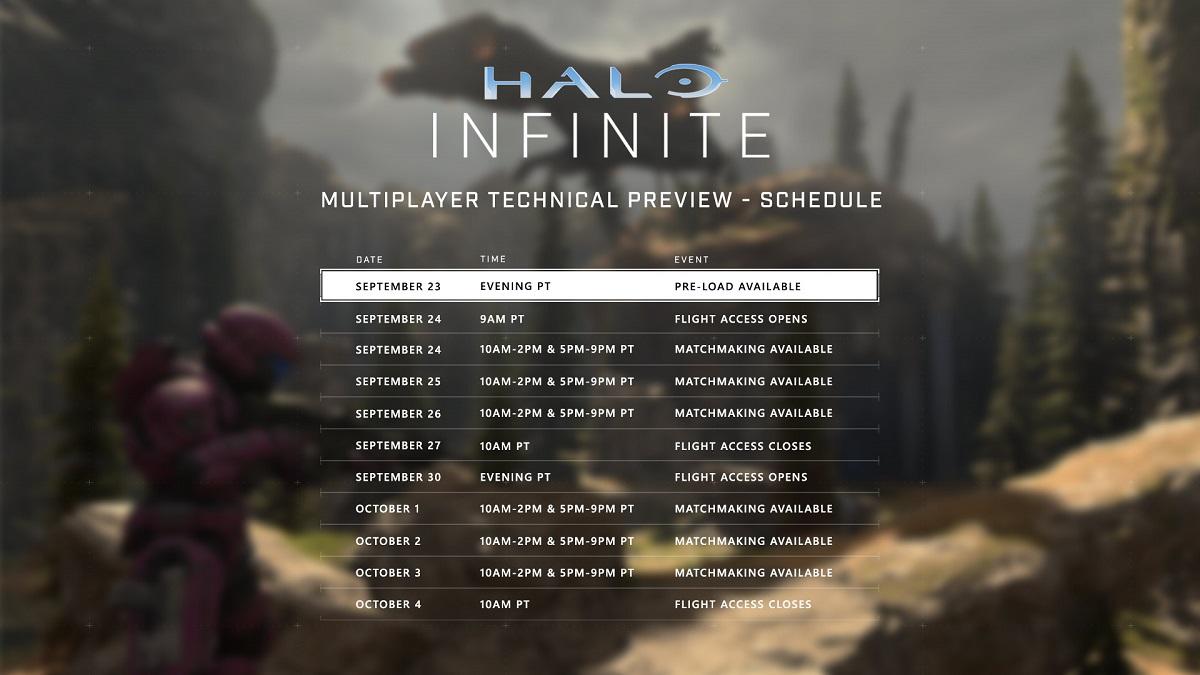 For those who didn't get into this week's test, there's still a chance you can get into the next one. Depending on how things go this weekend, 343 Industries said it might even let people invite friends during next week's test.

"Next week, we plan on expanding the audience through a few methods – including potentially allowing Halo Insiders to invite a friend – so that we can push the servers to their limit," 343 Industries said. "We'll have more to share about this audience expansion next week. We're excited to host our largest flighting audience to date, and we're eager to learn as much as we possibly can."

As for the content that'll actually be included in these beta tests, 343 Industries shared info on that as well. There will be a Training Mode and a Weapon Drills mode to give people an opportunity to learn or relearn the ropes while they get accustomed to different guns and mechanics. After that, you can head into the Bot Arena to play against bots (which hopefully won't mock you this time) and can play against other players within the Social Arena. Only during the second week of testing will the Big Team Battle mode be added to the game.

Players will also be able to experience the interfaces for the battle pass and challenges again. People offered their feedback on the progression systems after the very first test which prompted 343 Industries to consider some changes for the final product.

Halo Infinite's next multiplayer preview officially kicks off on September 24th followed by another test starting on October 1st.