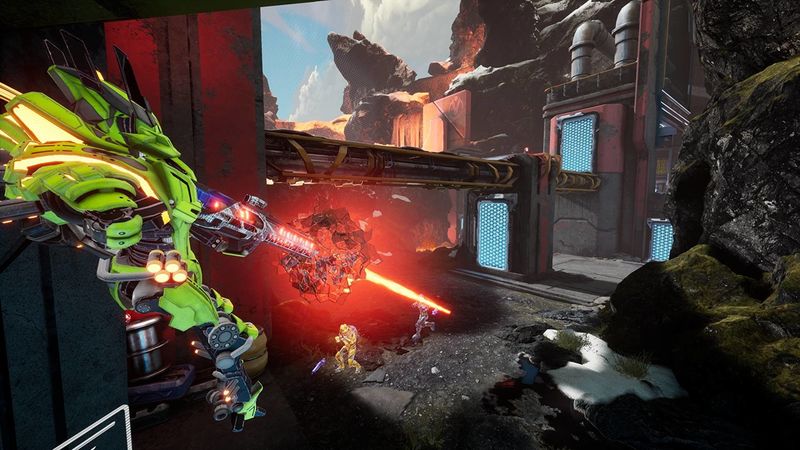 5
Despite being one of the most popular games on Steam and its developer attracting a whopping $100 million in investment over the past few months, Splitgate is still only in its infancy, a new interview with 1047 Games has revealed.

In an interview with TechCrunch, and with some comments to GamesBeat, game creator Ian Proulx explained where the studio wants to take the game in the future, now that it's broken through to the mainstream.

“The scope of what we can do is now through the roof,” Proulx explains. “There’s so much we couldn’t think about because we were a tiny team with a tiny budget, but now everything is on the table. We’re focusing on the long term — I look at the game as being 25% done. We don’t need to be Fortnite tomorrow, but now it really is about building the next Riot Games, the next big games business.”

In terms of what you can expect in the future, Proulx notes that skins, characters, and maps will be added to the game frequently, and 1047 Games intends to go on something of a hiring spree, aiming at recruiting more game designers so Splitgate can enjoy more modes in the future. That'll please the 13 million-plus people that have downloaded the game, no doubt.

The developer wants to continue offering players something different to what's already out there at the moment – as succesful as franchises like Halo, Call of Duty and Apex Legends are, the popularity of Splitgate has clearly outlined player appetite for something a bit different.

“No one has moved the needle because there hasn’t been a lot of innovation, and there hasn’t been something that’s accessible to the masses,” Proulx notes. “Quake Arena is great, but it’s extremely difficult. No 12-year-old Fortnite kid is gonna play it. We really do fill this void.”

Earlier in September, 1047 Games announced it had closed a third round of funding that brought in $100m (bringing valuation for the company up to a frankly ludicrous $1.5bn valuation). The developer has now seen more than $120m of investment – and it looks like it'll be using that money to ensure the game continues to appeal to an audience that's maturing past Fortnite and is hungry for something different.

Splitgate was set to launch properly back July on PC, Xbox One, Xbox Series X/S, PS4 and PS5. But 1047 Games delayed the full Splitgate launch until August thanks to the immense popularity of the game, where the title saw more than 10m downloads in under 30 days.

This games a lot of fun, high skill ceiling. Portal mixed with halo, with better gunplay than modern halo titles. Give it a shot if you haven't!