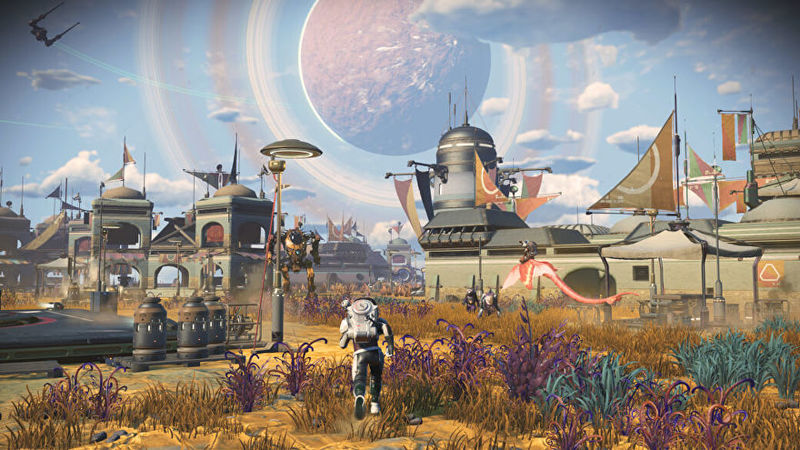 3.8
No Man's Sky Frontiers, the game's next free expansion, adds "Mos Eisley type settlements" to planets all across the galaxy and then lets you run them.

Frontiers will let players explore towns filled with NPCs and choose to settle in one of those towns, and you'll be able to help its inhabitants, resolve their disputes, and even work your way up to become Overseer. Doing that gives access to new buildings to help you grow your new home, but as it gets larger, you'll have to keep your fellow citizens safe.

You can get a closer look at the upcoming expansion, which was first teased as part of the game's fifth anniversary trailer last month, in the video below. That trailer offers a better look at the NPCs you'll be interacting with, as well as the procedurally-generated interiors of the settlements you'll be visiting.

Base building has been a part of No Man's Sky since its first major update, but Frontiers will expand upon that system significantly, with more than 250 new parts to build with, advanced controls, and a grid menu to help make more complex buildings to pad out your settlement.

As well as the new features unique to Frontiers, the update includes Expedition 3, which will focus on planetary mapping and exploration. Frontiers also offers visual improvements, access to extra save slots, and "monstrous" companions.

No Man's Sky Frontiers is out right now, and you can check out the full patch notes here. This is the fourth update this year, after Companions, Expeditions, and Prisms, which brought a suite of visual enhancements to the game.

"No Man's Sky Frontiers lets you be mayor of your own space town" :: Login/Create an Account :: 1 comment

To those reading this article and thinking "No Man's Sky? You mean that game that falsely advertised everything.. launched, crashed, and burned? That No Man's Sky?" --- think again. This game is the GOLD STANDARD, arguably, the best of all time, at a redemption arc. Hello Games has made good on every promise made, and then some. As a person who now has nearly 500 hours into this game, it's well worth the chance I recommend you give it. The best redemption arc in the history of redemption arcs.