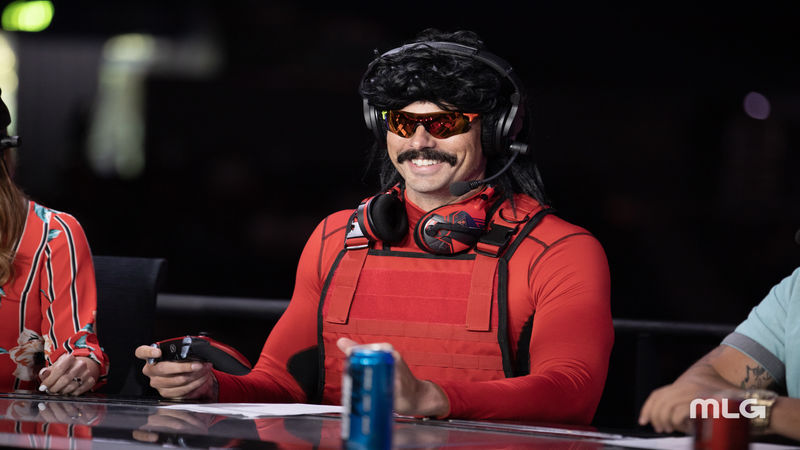 4.7
Last year, Twitch severed all ties with Guy "Dr Disrespect" Beahm, one of the platform's most successful streamers at the time. Immediately following the ban, the streamer claimed that he did not know why it was issued, but Dr Disrespect now claims that has changed sometime over the last few months. During an August 23rd stream, Dr Disrespect addressed the ban, stating that he now knows why he was banned from the platform, but he hasn't discussed it publicly for legal reasons. Apparently, the streamer is pursuing legal action over his ban from Twitch, though it's unclear on what grounds.

While this is the first time Dr Disrespect has fully acknowledged knowing the reason behind the ban, it's not the first time he's floated the idea of suing Twitch. The streamer implied that he intended to pursue legal action in interviews and during streams on YouTube. During a stream last September, he also implied that Twitch parted ways with him over his salary, rationalizing that they could bring in other talent at a fraction of the cost. Considering just how large and faithful his following is, however, it seems hard to believe that Twitch would have cut ties with him so firmly and abruptly over a simple salary dispute.

With Dr Disrespect publicly acknowledging that he knows the reason behind the ban, it will be interesting to see if fans might finally get some answers. The entire saga has been bizarre to say the least, and Twitch has been completely silent on the issue throughout. Dr Disrespect has made efforts to grow beyond the realm of streaming, with book deals, a plan to develop video games, and more. Given all this, his ban from Twitch seems to have been a slight hiccup on his journey. For now, fans will just have to wait and see if more information comes out in the near future.

People need to see this being highly worth to Doc saying that everyday he didn't stream on there platform took so much money from him including brand deals, platform deals etc he has money so I'm sure he's gonna push it and even if he doesn't win any publicity is good publicity.

what proof you have he violated his contract? he was faulsly banned for 0 reasonings until recent(new tos about the reason of ban)
still wont say what it is hes banned for though but its something that warrents a lawsuit.

honestly twitch has so much more issues that dr disrespect would fking win no matter what because twitch is a site for soft core p*rn or did you blindly forget that?

so yeah its pretty safe to say twitch is fked.

plus im surprise hes the first idiot to sue twitch over a ban wish other guys on suing twitch on them getting banned but thots not being banned.
can you see my point?

Since when do Twitch streamers get salaries?

If he is willing to spend the money to actually sue twitch, he has to know it is a bullshit ban and I can't wait to see why.

?? What does his wife have to do with anything?

Anyways that rant aside, a lot of people speculated it was because of the deal he took with mixer and they were pretty butthurt that one of the biggest grossing streamers ended up taking a deal with mixer and when it closed they didn't allow him to re-join (just speculation of course)

Until we know for sure, my best guess would be twitch kicked him off for some toxic masculinity bs, which tbh his personality was the reason I watched him whether it was for show or not. Hilarious guy. Hope he comes out on top if it's for that reason, unless he really did do something wrong.