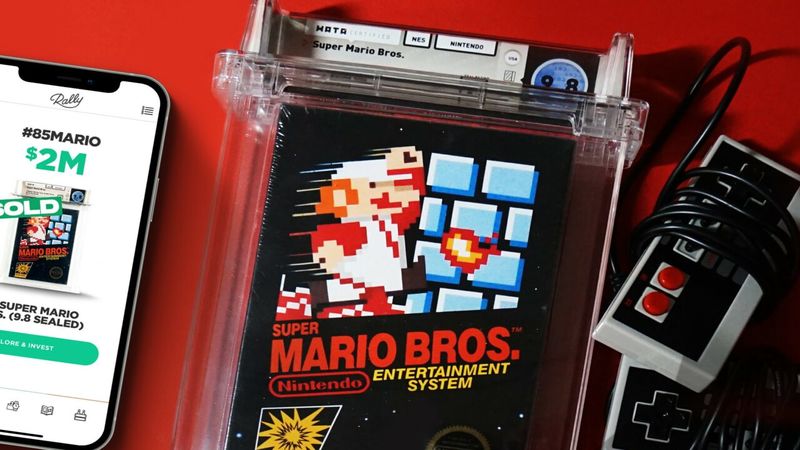 4.5
A new report alleges fraud in the grading and auction process which has seen a recent surge in retro game auction prices, most notably leading to a copy of Super Mario Bros. selling for $2 million this month.

Journalist Karl Jobst alleges in a 52-minute video investigation that grading company Wata Games and collectibles auction company Heritage Auctions have been complicit in artificially inflating the value of the retro video game market for their own gain.

Jobst alleges that Wata president and CEO Deniz Kahn has been working with Heritage Auctions co-founder Jim Halperin to manipulate the market through press releases and interviews claiming the value of retro games would continue to rise.

Wata directors have been grading their own games and artificially raising their value, it’s claimed, and very few of the games sold for extremely high prices are actually bought by game collectors.

Boxed retro games have experienced a surge in sale price over the past 18 months, with several notable video game auctions raising significant sums.

Every game mentioned above was graded by Wata Games, a company that gives games a numerical grade depending on their quality. Although game grading companies already existed before Wata (most notably the Video Game Authority, which was established in the mid-2000s), since its inception in 2018 Wata has quickly become considered the authority.

Jobst points out in his video, however, that when the Wata site was originally launched it had a Dealer Spotlight section that said Wata-certified products would be sold at a used video game distributor called Just Press Play, and also featured in Heritage’s online auctions. Heritage Auctions’ Halperin was also listed as an advisor on the Wata site.

This was followed by a Heritage Auctions press release celebrating the ‘world record’, in which Halperin promoted Heritage’s upcoming first Wata-certified video game auction. The press release also included quotes from Wata CEO Kahn, stating that the hobby’s upward trajectory “showed no signs of slowing down”. 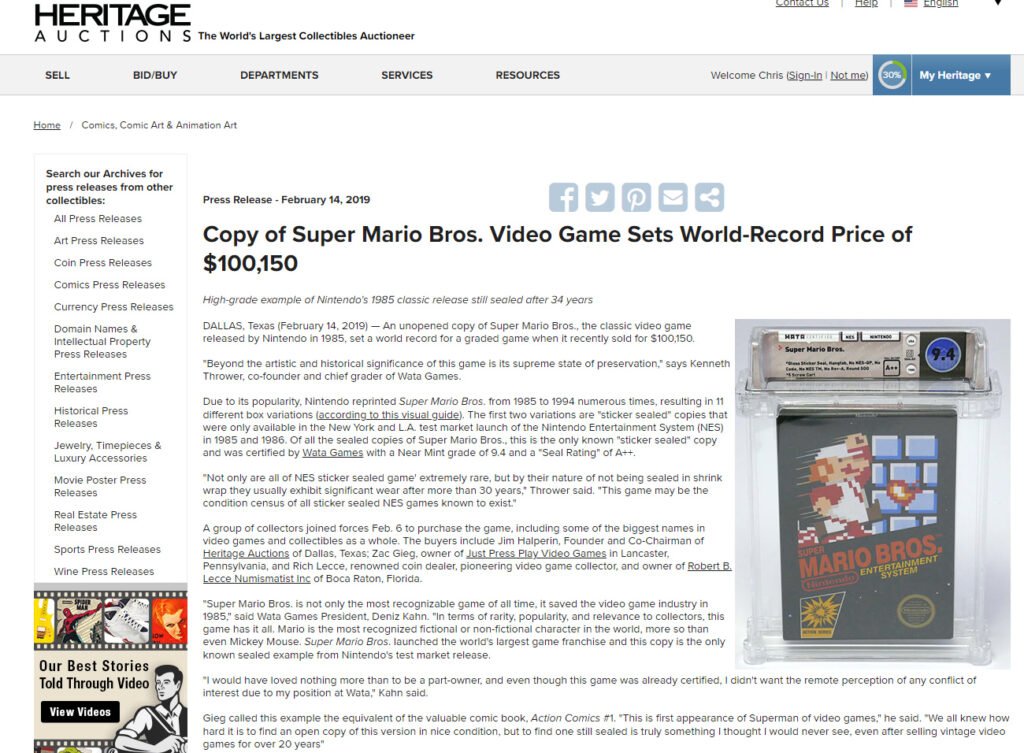 In his video, Jobst sums up the situation like this: “So what you have here is the chairman of the auction house buying a game for a record price, and then creating a press release about his own purchase, in which himself and the president of the grading company are stating that the value of games is going up.

“He then advertises that his own game will be going up for auction in the future through his own auction house.”

Jobst alleges that by doing this, Kahn and Halperin were deliberately trying to artificially inflate the price of the retro video game market so both their companies could make more money off the back of it.

So by allegedly working together, Heritage and Wata stood to make a lot of money by valuing retro games at extortionate prices and selling them at auction, it’s claimed.

Jobst alleges that Kahn continued to manipulate the market by regularly giving interviews to sites in which he claimed the value of games was rising, once saying “it’s only a matter of time until a video game sells for a million dollars”.

Kahn also appeared on TV show Pawn Stars multiple times, grading games at extremely high prices as part of what Jobst claims was a “very large, very effective campaign to establish WATA as the authority on video games, despite having only been created.”

It’s claimed that very few of the games selling for extremely high prices are actually bought by game collectors.

Jobst’s report points out that fractional share companies such as Rally, Otis and Mythic Markets have been responsible for buying a large number of these games.

These companies then sell ‘shares’ of a game to investors, who buy them in the hope that their value will rise so they can then sell their share to someone else.

For example, Rally bought a copy of Super Mario Bros for $140,000 in 2020. This is the same cartridge that sold for $2 million earlier this month, earning its investors a large return on their investment.

“None of the people who buy equity in any of these collectibles actually own it,” Jobst says. “It’s purely to try and make bets on its price and earn a quick buck.”

People are also buying Wata games from auction and trying to flip them on eBay. “I haven’t heard of a single legitimate collector buying any of these expensive games,” Jobst claims. “It’s entirely speculation, purely for profit.”

Another strong allegation Jobst makes in his video revolves around Jeff Meyer, the founder and CEO of comic price guide site GoCollect.

NintendoAge – a collector-run website that offered a huge database of information on retro Nintendo games including their rarity and alternate releases – was founded by Dain Anderson. 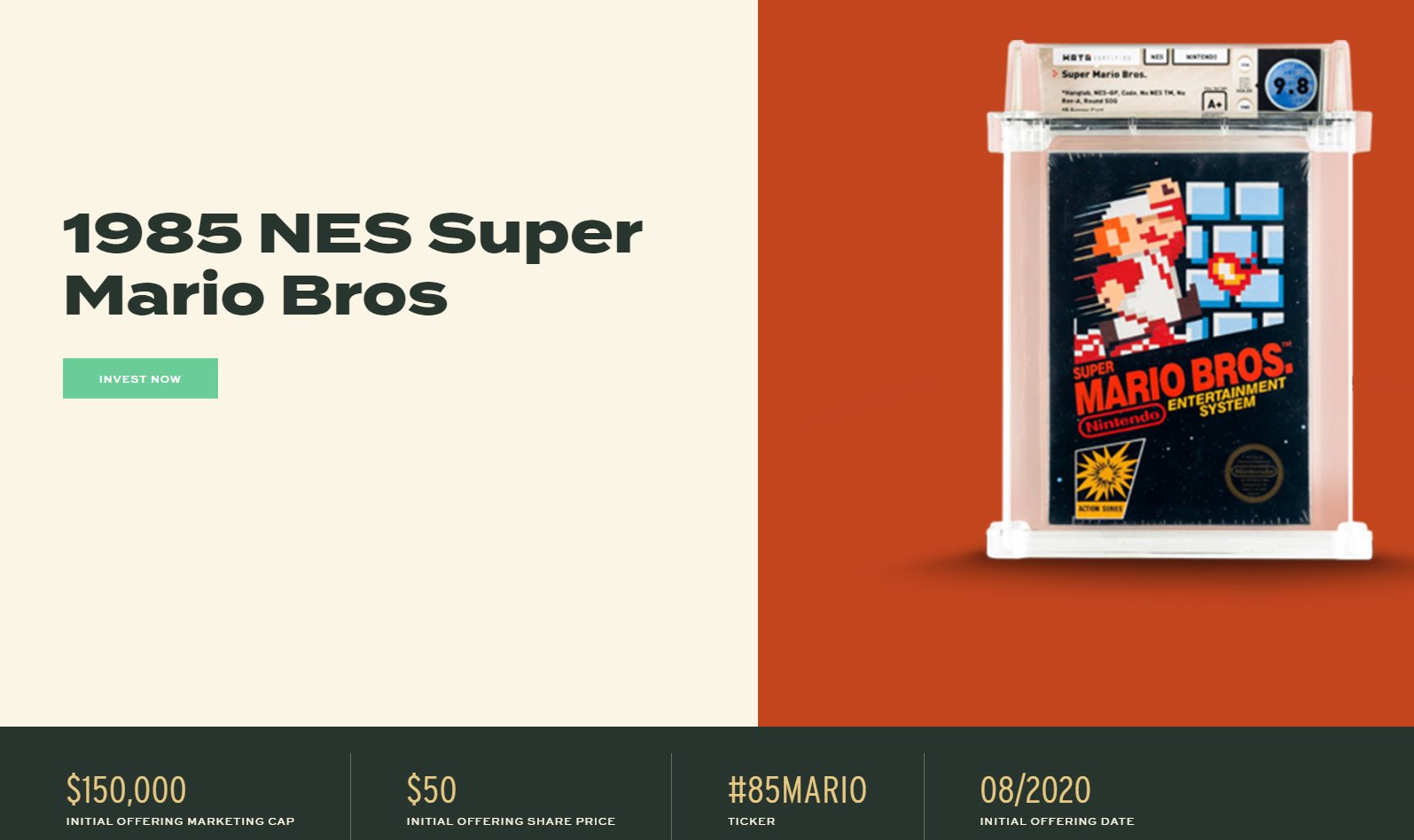 Anderson reportedly owned one of the largest collections of sealed Nintendo games in the world, but in 2019 he sold the entire collection to GoCollect founder Meyer.

Following the sale, the entire collection was graded by Wata and was even given a special name, The Carolina Collection, which appeared on each game’s grading label. Meyer then started selling the games through auction houses including Heritage Auctions, who sold an initial batch of his games for over $540,000.

However, Jobst discovered through Wata’s Securities and Exchange Commision (SEC) filings that GoCollect boss Meyer is actually a director at Wata, something it’s claimed he has never publicly disclosed.

Last year, Wata told the New York Times that Wata employees were “not allowed to have games graded by the company or sell those that were”.

“So what you have,” Jobst summarises, “is the president of Wata Games saying that employees are not allowed to grade or sell graded games, but meanwhile a director of the company is grading his entire collection.

“But not just grading it, grading it in a special privileged way by naming it, therefore increasing the value, and immediately selling them through auction houses at insane prices for profit.

“If the games in this collection were graded just like any other game there would be nothing illegal about this.

“However, considering the fact that they were graded in a unique and special way, there is a very good argument to be made here for fraud, especially given that Jeff’s relationship with WATA Games was never disclosed to the public.” 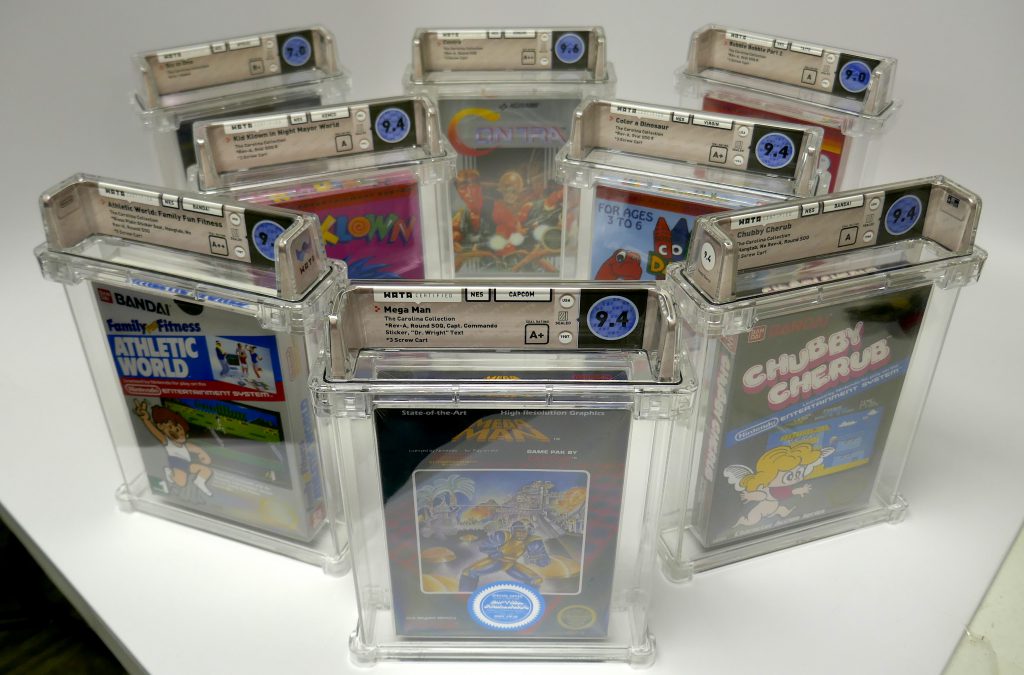 Meyer also purchased NintendoAge from Anderson and immediately shut it down, causing Jobst to suggest that “on the surface it appears as though Jeff is trying to own and control the flow of information about the value of video games, which only ends up being more suspicious given his ties to Wata Games – again, another huge conflict of interest.”

Jobst alleges that Meyer continues to intentionally hide his director role at Wata, citing a GoCollect blog post written by him in 2020 in which he refers to a new video game price guide on the site “thanks to the awesome folks at WATA Games”, implying they’re a third party.

When WATA games was incorporated in 2017, Dain Anderson was the executive officer.

Jobst also accuses Kahn of being complicit in this, pointing out that Anderson – the NintendoAge owner who sold the games – was also the executive officer of Wata when it was incorporated in 2017.

Jobst says “[Kahn] obviously knows who the directors of his company are”, but didn’t disclose their relationship to the company in a blog post about The Carolina Collection, shortly before his interview with the New York Times telling them employees were not allowed “to have games graded by the company or sell those that were.”

In response to Jobst’s video, lawyer and journalist Seth Abramson tweeted a lengthy article with all his NES market research.

Abramson claims that “the games that are making them rich are the most widely available (and yes, even in high grades) in the world”.

When I asked sellers getting rich off this artificial market how they react to the hard data above, they said that even common NES games are scarce relative to scarcity in other markets. But this is a misdirection—as this is only the *first wave* of the WATA boom. They know that.


He also says that Wata previously “accidentally self-leaked” information claiming that it had graded more than 750 copies of Super Mario Bros 3 since it was founded, but that only 65 of them had come to market sealed.

Abramson says this data suggests “that major investors are holding many copies of Super Mario Bros 3 and slowly releasing them into the market to hide how ubiquitous the game is sealed/graded”.

“While that may be legal, it underlines that by 2024 the market will be saturated with games people are paying $30,000 for now,” he adds.

“Until the market busts, and there are no more re-sellers for the big sellers to sell to.”