Steam Deck Comparison Photos Reveal How Big the Handheld Is 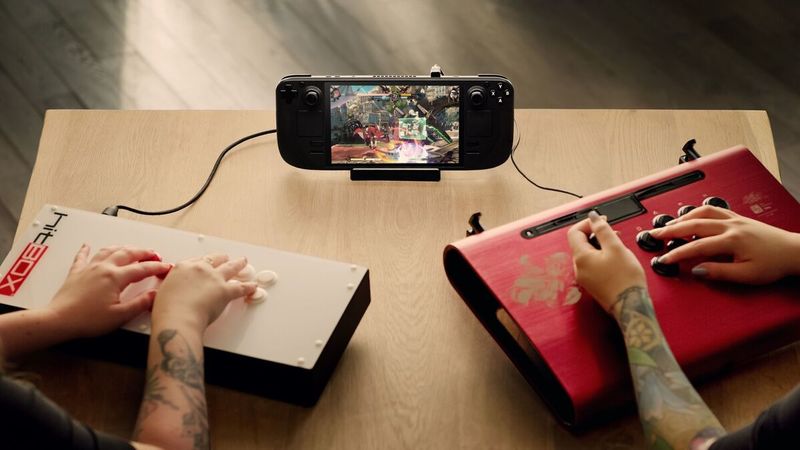 3.3
Valve’s Steam Deck reveal left people with plenty of questions about the device with one of those queries asking just how big the mobile PC would be compared to other handheld gaming devices. We knew the size of the system already after Valve published the specifications of its Steam Deck systems, but seeing numbers on a page is hardly ever the same as seeing two or more pieces of hardware side by side to directly compare their sizes. Thanks to some recent hands-on opportunities people had with the Steam Deck, we’re now able to see how Valve’s handheld stacks up to the competition.

The Steam Deck site said the handheld device was sized at 298mm x 117mm x 49mm which translates to “pretty big” when you put it next to other devices. Hands-on experiences shared by Giant Bomb’s Jan Ochoa and The Verge’s Sean Hollister showed what the device looked like next to a Nintendo Switch which is naturally the device that people drew the most comparisons to when talking about the Steam Deck. Ochoa’s photo also showed the Steam Deck next to past handhelds to show that among the gaming systems that fit between your hands, the Steam Deck isn’t small by any means.

I have held and played the Steam Deck.

It is ginormous compared to a Nintendo Switch.


That’s to be expected since it’s been marketed as a mobile PC and not a mobile console like the Switch, but the photos still put it into perspective just how big the device is. While it’s not as easy to tell from the larger comparison picture, seeing the Nintendo Switch stacked on top of the Steam Deck shows how thick the handheld PC is, too, compared to the alternatives.

While these hands-on opportunities are useful for people who want to know more about how the device actually performs, it might be a while longer before some people get to experience the Steam Deck themselves. Those who were able to get in on the pre-orders in decent time should have theirs by the end of the year, but for those who were in waves after the initial sales, your Steam Deck might be a bit further behind since delivery estimates kept getting pushed back.