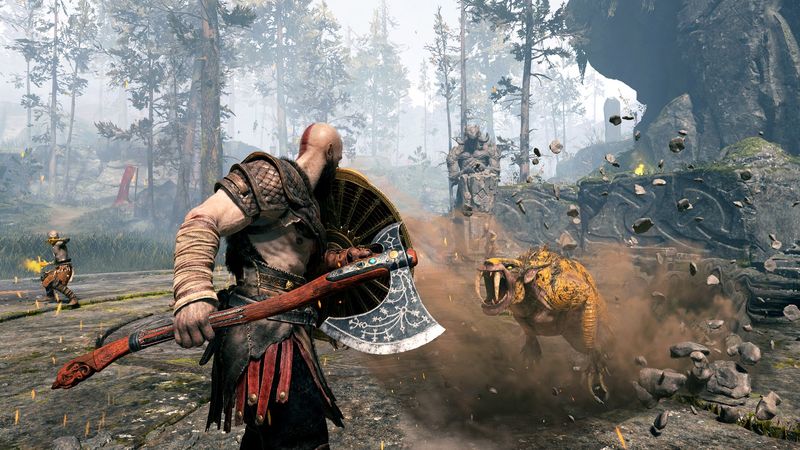 4.2
God of War director Cory Barlog is never one to talk about the game's upcoming sequel, which many fans have taken to simply referring to as Ragnarok. Whenever the game is brought up to Barlog on social media, the beloved game developer continues to state that he's "never heard of it." As such, whenever Barlog does seem to allude or tease something on Twitter that could be associated with the upcoming title, it always leads to fans getting quite excited and asking many questions.

Well, once again, one of these potential "teases" related to God of War: Ragnarok seems to have come about from Barlog on Twitter today and it has sent fans into a tizzy. For seemingly no reason at all, Barlog tweeted out a message this afternoon that featured nothing but heart emojis. He then attached a GIF of the God of War characters Sindri and Brok doing a high five. Barlog didn't say what prompted him to make this tweet in the first place, but as you might expect, a number of fans assumed that it somehow involved Ragnarok.


Of the most popular fan theories that have come about because of this tweet, some have chosen to believe that some generally good news related to the next God of War title happened today for Barlog and the team at Santa Monica Studio. Others have gone so far as to hype themselves up and believe that a release date announcement for Ragnarok could be announced in the near future from PlayStation. And a third group of people didn't have their tin foil hats on whatsoever, and simply wished Barlog well or responded with a God of War GIF of their own.

As a whole, it's still hard to know when we might next hear more about God of War: Ragnarok. Originally slated to release this year, PlayStation Studios announced a couple of months back that the game would instead be pushed to 2022. Furthermore, it has almost been a full year since the original teaser trailer for Ragnarok was released, meaning that we still don't have much to go off of. Still, new rumors and reports have emerged recently indicating that a new State of Play event could be happening next month. And with this in mind, many fans are believing that the silence surrounding Ragnarok could soon be coming to an end.