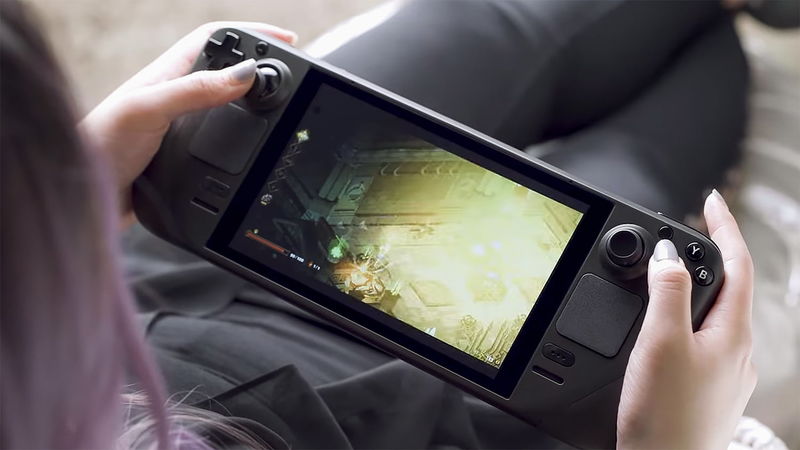 3.9
It's hard to believe the Steam Deck was confirmed less than a week ago. After just four days, the gaming community is already full of questions about his new handheld, wondering exactly what a portable PC is capable of - especially when acquiring one ourselves may prove challenging. Valve's Pierre-Loup Griffais sat down with IGN to answer some of the questions fans will be asking, shedding some light on what we can expect.

Of course, being a handheld, the subject of battery life came up. Yet despite the console's power, the battery life shouldn't be too far off that of fellow handheld console, the Switch, as Griffais claims it will last anything between two to eight hours.

Explaining that the battery will vary from player to player, Griffais says: "It's about two to eight hours, depending on what you're doing. You can play Portal 2 for four hours on this thing." He also explains that running games at 30 FPS could stretch the run time to six hours.

This isn't too far off from the Switch. Nintendo claims the original model can last between 2.5 and 6.5 hours, which will apparently be boosted to anywhere from 4.5 to nine hours with the OLED model. Much like the Switch, you will be able to pick up a dock for the Steam Deck, so you can play from your TV without having to worry about the battery life.

Griffais also revealed other little tidbits regarding what to expect from the Steam Deck. For example, there is a built-in light sensor, which will automatically adapt to your surroundings much in the same way a smartphone does. There will also be built-in microphones so you can chat in multiplayer without a headset, although any headset you do have should be compatible with the Steam Deck, including those using Bluetooth.

The Steam Deck is available to reserve now, with orders expected to ship in early 2022 for the 64GB model. Higher performance models are set to go out later in the year.

"Steam Deck Battery Life Is 2 To 8 Hours Depending On use" :: Login/Create an Account :: 0 comments