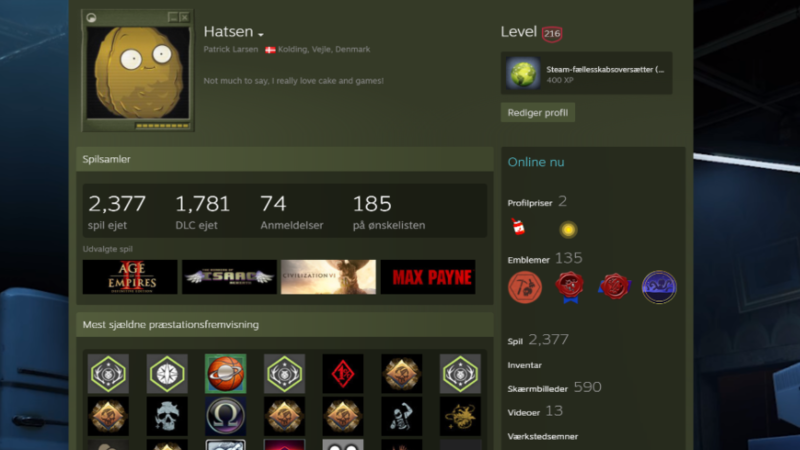 3.7
The Steam Summer Sale is here and there's plenty up for grabs from Sea of Thieves to the recently released Mass Effect Legendary Edition. However, there are also new items to be had in the point shop, and one of these, a Half-Life: Alyx-themed item, brings back a nostalgic memory - the olive green aesthetic.

As pictured above, it's a retro getup that's akin to Steam's early days before it was slick, modern, and grey with a tinge of blue. Back then, it was a greenish hue with boxier, more notable edges alongside the classic yet rigid close and minimize buttons. It was all very Windows XP.

The profile skin is themed around Half-Life: Alyx so the animated background you get as part of the bundle features Russel in his little run-down apartment complex with flickering CRT monitors adorning CCTV footage. He sits at his desk by his microphone, staring at an audio wavelength.

This is a new form of item that's been implemented as part of the 2021 Summer Sale, so there are a few games to showcase how it works. There's Valve's staple, Counter-Strike: Global Offensive, the recently released Cyberpunk 2077 and Resident Evil: Village, and the award-winning indie Hades.

Village actually sports two. One is a lighter, colder variant that's all about Chris Redfield, while the other is much warmer in tone, featuring the Dimitrescu Castle more prominently with an animated Alcina avatar. Capcom is really taking advantage of the inadvertent marketing gold they struck with her.

Cyberpunk's is a very pink, neon getup with a holocall avatar frame that you'll recognize from in-game when other characters ring you up, while you also get a Delamain animated avatar. Hades, meanwhile, is centered around Zagreus, with his father and Cerberus taking up the left and right spaces.

Each costs 10,000 points which you get for buying games, so if you want to nab some bonuses this Summer Sale, why not shake up your profile and add a bit of style to it.

Wow how nostalgic, I wonder if I have enough points for this...