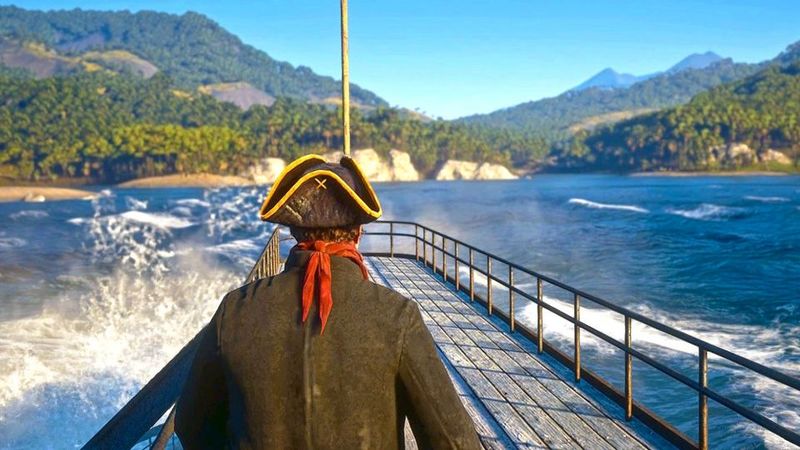 While Red Dead Redemption 2 has not received any single-player DLC since its release, it has spawned a dedicated community of modders that have made efforts to fill that gap. There is a massive library of mods available, including adding VR support or allowing Red Dead Redemption 2 players to own pet dogs in the game. Now, one modder has made it possible to see what a pirate-themed DLC for Red Dead Redemption 2 may look like.

The mod in question comes from YouTuber Devilbringer Games. Devilbringer published a five-minute video showcasing the mod and what players can expect if they download it. They also note that they have the mod running with all of the settings on maximum, so the video also serves as an excellent showcase of the game's impressive graphics. The video primarily showcases the mod on the tropical island of Guarma, which is one of Red Dead Redemption 2's most breathtaking locations since it definitely feels like the area in the game more suited for some piracy.

The footage of the mod that the video shows off makes it look like it could be quite a bit of fun for any Red Dead Redemption 2 players who want to shake things up a little bit. Not only does it feature a character complete in pirate garb with a cutlass, but it also features them walking on the decks of some of the game's boats as well as battling with throwing knives and hunting in the jungle. The mod does seem to open up the island of Guarma quite a bit, which might also be a nice way for players to explore the location and find some of the secrets that Red Dead Redemption 2 has there.

It is great to see the amount of creativity and work that the Red Dead Redemption 2 community is willing to pour into the game. Many of the mods that are available are extremely impressive, and it is surprising just how much the community has been able to accomplish. The wait for a follow-up to Red Dead Redemption 2 is sure to be a very long one, but it is great for players that the game has such a busy modding community to tide them over until then.

Red Dead Redemption 2 is available now on PC, PlayStation 4, Stadia, and Xbox One.

"Red Dead Redemption 2 Modder is Trying to Turn It Into A Pirate Game" :: Login/Create an Account :: 0 comments