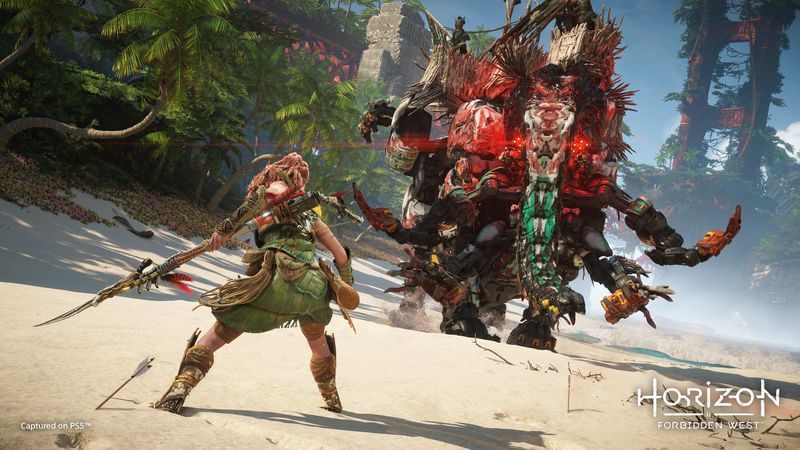 4.3
PlayStation and Guerrilla Games showed off some more of Horizon Forbidden West this week by previewing the game’s story, combat, and the setting where it’ll all take place. Like Horizon Zero Dawn before it, Horizon Forbidden West will see Aloy embarking on an experience in an area filled with flora and mechanized fauna for players to encounter. Following that State of Play preview, we now have a better idea of how big the map will be.

To know how big the map is in Horizon Forbidden West, you’ll first have to have played Horizon Zero Dawn which, if you’re interested in the sequel, you likely have. IGN spoke to Mathijs de Jonge, the game director working on Horizon Forbidden West, to learn more about the size of the map and what players can expect from it. The game director said people can expect not only a slightly larger map but one with more stuff to do in it as well.

State of Play unveiled over 14 minutes of brand-new Horizon Forbidden West gameplay. Catch up on the full show: https://t.co/a5ZavCEzJh pic.twitter.com/XFbgouQDwN


“The map is a little bit bigger, but in general, we've really looked at increasing the density, and adding more content, making sure there's a lot more to do for the player across the map, and then making that content also engaging by telling little micro-stories,” de Jonge said.

In addition to being larger in size and having more to do inside of its boundaries, the map of Horizon Forbidden West will also offer new experiences vertically since the game’s free climbing system has been worked on to be different from what it was before. Discussing the climbing system again with IGN, de Jonge said the developers decided on an “automatic system that just detects if there is a latch somewhere in the geometry.”

“In terms of the traversal and the human combat, this was a point from Horizon Zero Dawn, where we wanted to improve the mechanics,” de Jonge said. “And this [State of Play] is a showcase for that, to show you can now free climb anywhere in the world.”

While information like this was shared in the State of Play event, one thing that wasn’t specified was the game’s release date. That led some to worry that the game might’ve been delayed, but as of right now, it’s still on track for a 2021 release, according to the developers and Sony.