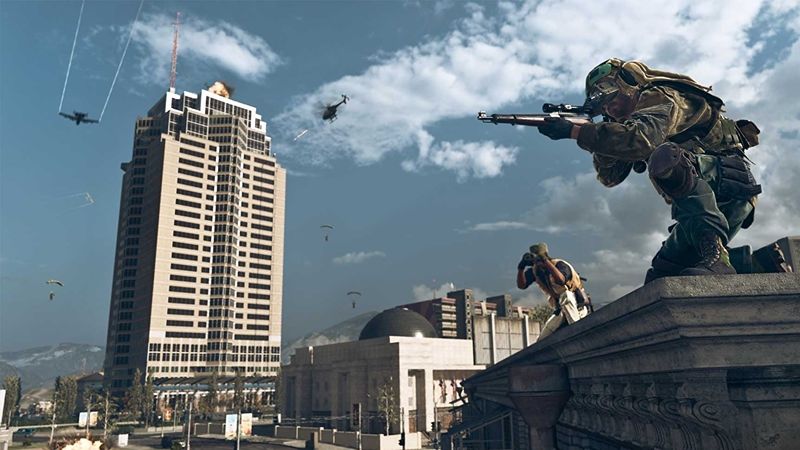 4
Nakatomi Plaza is coming to Call of Duty! Both Call of Duty: Warzone and Call of Duty: Black Ops Cold War have been teasing a new event called '80s Action Heroes, which will be putting skins for Rambo and John McClane into the games. On Tuesday, Call of Duty unveiled the trailer for the event, which shows off the '80s-style action, the Rambo skin, and some big changes coming to downtown Verdansk. Some of the buildings in the footage will look very familiar to Die Hard fans.

Very early in the trailer, you can see the iconic Nakatomi Plaza, standing tall over the rest of Verdansk. Some shots of the action later show a shoeless John McClane running through the building, and the character's hands holding a flare as he crawls through the air ducts. Call of Duty is officially going full Die Hard.

Based on the footage of a player crawling through the vents, it seems as though the new event will actually include storylines and missions based on Die Hard and Rambo, rather than just introducing some skins based on iconic action heroes.

The '80s Action Heroes crossover will officially begin on May 20th, and there are no details about how the event will work just yet. There will likely be some in-game content, modes, and missions associated with the characters, but it will be a bit of a surprise if the new characters are made unlockable through gameplay. There will likely be an Operator Pack to purchase in order to gain access to McClane and/or Rambo.

When Season 3 went live a few weeks ago, all of Warzone was merged with Call of Duty: Black Ops Cold War, sending the entire map back to the 1980s. The Stadium is still under construction, the roads are a bit different, and many of the buildings seem to be more recently constructed. With the pivot to the '80s, it makes sense to really lean in to this action heroes crossover. After all, most of the biggest action heroes in history came from the 1980s.

This will be the second video game crossover for Rambo in recent history, as he was added to the expansive lineup of Mortal Kombat 11 in one of the game's Kombat Packs.

Nothing quite like a bit of Rambo and McClane :D