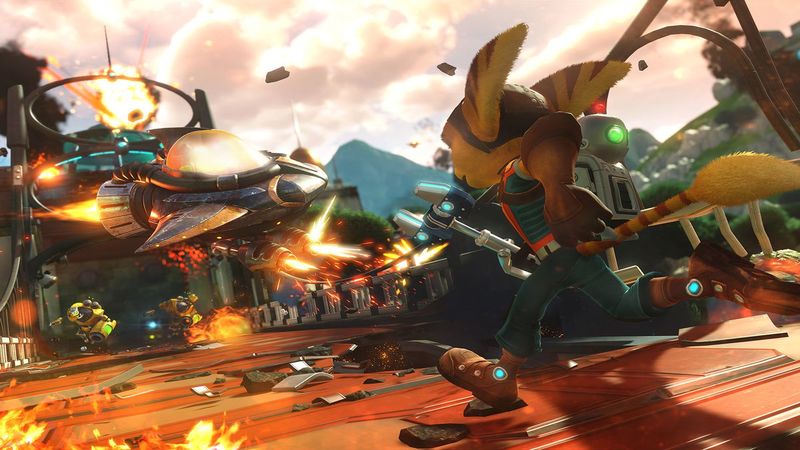 3.9
The beloved 2016 reboot/remake of Ratchet & Clank is getting a highly-anticipated facelift, as Sony and Insomniac have committed to upgrading the game for the new PlayStation 5 console. Insomniac initially announced the Ratchet & Clank upgrade earlier this week, revealing that the PS5 update would be arriving at some point in April. However, it appears as though the upgrade was ready earlier than expected, and it is currently being rolled out to players as we speak.

On Friday afternoon, Insomniac Games took to Twitter to reveal that the PS5 upgrade for Ratchet & Clank had officially gone live earlier than initially announced. If you've got a PS5 and a PlayStation Plus subscription, you'll be able to download both the game and the update right now. The game has been available for free on PS5 to those with PS Plus.


"Surprise! The update is now live," reads the tweet from Insomniac. "Get blasting, Rangers!"

While Ratchet & Clank has been available for free to PlayStation 5 players for months, PlayStation 4 players have only been able to access it for free throughout March. Sony made the game free for everyone, regardless of your PlayStation Plus subscription, as part of this year's Play At Home initiative.

The initiative was launched again in 2021 as a way to keep people entertained while unable to go out due to the pandemic.

"Hello again! The past 12 months haven’t been easy. And I think we’re all hopeful that we may be starting to see some flickers of light at the end of this long COVID-19 tunnel thanks to the tireless work of the medical community and people around the world," said Jim Ryan, president and CEO of Sony Interactive Entertainment. "In these historic times, the team at PlayStation wanted to thank the community by giving something back. These days, we could all use something to look forward to and another reason to stay safely socially distanced, so we are happy to be able to offer a free selection of great games and some entertainment offers.

"Last April, we launched the Play At Home initiative, offering up two incredible PlayStation games for free: Uncharted: The Nathan Drake Collection and Journey. I like to think they helped make the year just a little bit easier. This year, we wanted to go further. So we’ve designed a series of free games and entertainment offers for our PlayStation community to make the next few months a little more fun and enjoyable."