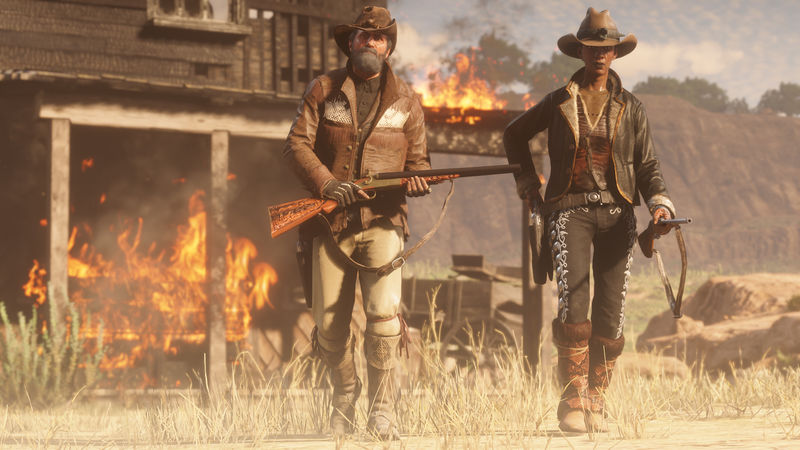 There’s a heap to sift through, but the thoughts of the community can be summed up through the various dedicated content creators who have posted their thoughts on the update. One of the more common points people make isn’t so much about the Outlaw Pass, but what it comes alongside. Outlaw Pass 4 came with a role extension for the Bounty Hunter, whereas Outlaw Pass 3 went with the Naturalist update. Outlaw Pass 5, however, is a solo affair with no new roles or extensions.

Red Dead Online’s roles system gives players ways to progress and grind that allow for more immersive roleplay while offering a hint of story. Naturalists are all about snapping photos of animals or turning them in to get a new coat. It’s something to do, but it’s made all the more entertaining through watching Harriet and Gus MacMillan butt heads over whether you should be saving the animals or turning a profit on them. Outlaw Pass 4 also introduced weekly legendary bounties – it’s still about rustlin’ up some baddies for a tidy fee, but each of them is vivid and full of character, making them feel more worth catching.

As for the Outlaw Pass itself, players have found the rewards to be reasonably meagre. The clothes on offer are described as being more suitable as Halloween content than Outlaw duds, and other items – such as a straw beard – haven’t gone down too well, either. There are plenty of gold bars on offer if you buy into the new Outlaw Pass, but players feel there isn’t much on offer here aside from cosmetics they don’t like.

Some point out that you can get a role experience boost in the pass despite the lack of a new role to use it on. Chances are it’s more pointed towards new players who haven’t maxed out their Bounty Hunter role yet, but that doesn’t offer much for the game’s more hardcore players.

Outside of the Outlaw Pass, long-standing frustrations also play a role in current community sentiment. Red Dead Online gets a handful of updates every year, and Outlaw Pass 5 is on sale until the end of May – so players reckon this is what they’ve got to entertain themselves until then, though this is far from confirmed.

Comparisons with GTA Online are never far away, either, as Rockstar’s flagship title gets features such as new heists in updates and more. Heists and bank robberies have long been a desire for the Red Dead Online community, and this isn’t that, essentially.

So i completed the outlaw pass 5 and put on the fake beard and the Faucheux set or whatever it's called and this abomination was born. from r/RedDeadOnline

Red Dead Online’s weekly update is set for today, so players will get something to add a sense of variation to their weekly routines. How long that’ll tide them over for, though, remains to be seen.