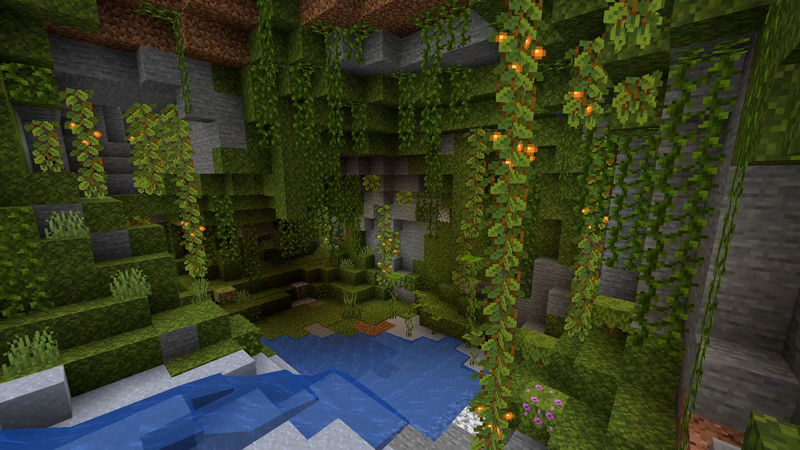 4.3
Minecraft is gearing up for one of its biggest updates ever, with the release of Caves and Cliffs later this year. Ahead of the major release, Mojang Studios has been releasing certain features via Snapshots.

Last week, the Minecraft 1.17 Snapshot 21w09a was slated to release. Unfortunately, the developers announced that there will be no snapshot last week. Today, Mojang Studios has released Snapshot 21w10a for Minecraft. This Snapshot adds Lush caves to the game. Apart from that, there are several other bug fixes and improvements that have been introduced as well. Here are the complete patch notes.

Minecraft 1.17 Snapshot 21w10a (Today, March 10) – Patch Notes
A truly fabulous snapshot enters the arena! This snapshot brings fundamental changes to our rendering pipeline with the introduction of the brand new tech that is OpenGL Core 3.2. On top of that, we’re finally introducing the Lush Caves biome. However, as with the Dripstone Caves, this is only available through creating a custom world.

NEW FEATURES IN 21W10A
Added Lush Caves underground biome!
Added Cracked Deepslate Bricks and Cracked Deepslate Tiles
There is now an Infested variant of Deepslate found in the underground
While they will not generate in the world by default, Deepslate versions of copper, emerald and coal ores have been added for use by creators of maps and data packs

LUSH CAVES BIOME
The Lush Caves underground biome now exists for use in single-biome worlds. It does not yet generate in other world types.
Moss covers the floors and ceilings
Spore Blossoms grow from the ceiling and drip particles
Contains clay pools with Dripleaf Plants grow out of them
Contains Azalea Bushes and Flowering Azalea Bushes
The Azalea Tree loves to have its roots in lush caves, so if you find an Azalea Tree (either overground or in a cave) you know there is a Lush Cave beneath you
Cave Vines with Glow Berries grow from the ceiling and light up the caves

CHANGES IN 21W10A
Cobbled Deepslate can now be smelted into Deepslate
Deepslate can now be placed along any axis
Lightning rods can now be waterlogged
Fossils in the deepest part of the underground generate with Deepslate Diamond Ore instead of Coal Ore
The textures of Deepslate and some of the ores have been updated
ORE DISTRIBUTION
Overworld ore generation has been tweaked.

TECHNICAL CHANGES IN 21W10A
The game now runs using OpenGL 3.2 core profile
The maximum size that slimes can be summoned with is now 128
The give command can only give up to 100 stacks of items at a time (e.g. 6400 stone or 100 iron swords)
OPENGL
Rendering is now using OpenGL 3.2 core profile. All fixed function rendering has been replaced with shader based rendering.

SHADERS
Shaders are now included for all supported render states. Any shader except for the blit shader can also be replaced in resource packs. For now replacing these shaders is not officially supported and the way it works may change in the future.

The current rendering engine uses a system similar to the post processing shader pipeline. There are some differences between both system that cater to the slightly different requirements.

FIXED BUGS IN 21W10A
MC-29318 – Client misses inventory updates while player is manipulating items – causes invisible items
MC-84121 – Shape of glow effect is based on mob’s base layer
MC-87019 – Only visible slots are updated clientside when you are inside an inventory
MC-154094 – Lectern running /clear turns items into ghost items
MC-175964 – Setblock command run by book in lectern to clear inventory run in command block causes ghost items
MC-201316 – The /give command can create so many items that the game will freeze
MC-207818 – Placing a sign from the offhand closes the sign UI immediately
MC-208301 – /clear does not properly affect the item on the mouse pointer after crafting it
MC-210408 – /spawnpoint allows players to set their spawnpoint to out-of-bounds coordinates, which crashes the game when trying to respawn
MC-211666 – Guardians attack invisible axolotls
MC-212127 – Normal ink sac and glow ink sac are not grouped in the creative inventory
MC-212144 – Subtitles refer to Glow Item Frame as “Item Frame”
MC-212168 – Ctrl + Pick Block doesn’t copy block state “lit”
MC-212236 – Cannot visually critical-hit a glow squid (No sound/particles)
MC-212314 – Glow squid remains dark even if there is a light source block next to it
MC-212325 – Glow Squid entity data (potion effects, custom name, …) does not get saved
MC-214629 – FOV decreases when underwater regardless of FOV Effects accessibility setting
MC-214781 – Lava does not generate at the very bottom of noise caves
MC-214784 – Fossils can generate floating in caves
MC-214836 – Water caves cause land to be excessively flooded
MC-214844 – Bedrock can be exposed to the air at the very bottom of the new caves
MC-214970 – Phantoms continously make too much flapping sounds
MC-215194 – Structure blocks do not work below y=0
MC-215838 – There is currently no way to craft deepslate tiles and deepslate bricks
MC-215850 – Deepslate Tile Wall comes before Deepslate Brick Wall but Deepslate Bricks come before Deepslate Tiles in creative inventory
MC-215939 – Emerald ore spawns in lower frequencies than it should above y=100
MC-216136 – Polished deepslate slab isn’t grouped with the other deepslate slabs in creative inventory
MC-216363 – Crash upon replacing soul sand or magma with the other under a tall bubble column using /setblock
MC-216735 – Stone Lapis Ore generating in Deepslate
MC-216736 – Lava lakes generate exposed in caves
MC-216765 – Coal ore can generate below Y=0 when attached to a fossil
MC-216817 – Inconsistency: Cobbled deepslate cannot be smelted back into deepslate
MC-218139 – Spectator vision bug