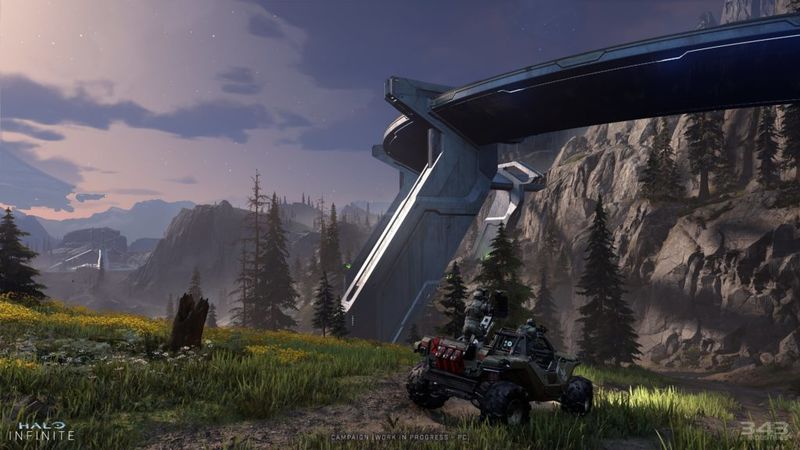 4.2
Xbox and 343 Studios have released a new batch of screenshots for Halo Infinite, showing the visual improvements that have been made to the game’s campaign since it was first revealed last July.

The new screens, revealed as part of 343’s latest Inside Infinite blog, show off the campaign mode running on PC hardware, much like the original gameplay demo shown during the 9-minute gameplay demo seven months ago.

While that demo was met with criticism for its perceived lack of visual progress since the last Halo game, the new screens appear to show more impressive visual detail, most notably in a demonstration of how the time-of-day lighting system affects the game’s atmosphere.

In the blog, 343’s Campaign Art Lead Justin Dinges stated that the art design will focus on two themes, ‘Legacy’ and ‘Simplicity’.

“For ‘Legacy’ we really want players to feel like they are experiencing a game that they remember fondly (Halo: Combat Evolved), but with modernized graphics of course,” he explained.


“As far as ‘Simplicity’ is concerned, we wanted to ensure that we steer away from overly noisy designs and details, which is a key takeaway for the team coming off Halo 5.

“With Halo Infinite, we wanted to take this new adventure back to its roots and create a visually pleasing experience that doesn’t overwhelm with unnecessary complexity where readability and clear artistic composition prevail.”

When its gameplay was first revealed in July 2020, Halo Infinite’s visual fidelity faced widespread criticism from the media, fans and even big brands, who highlighted issues with the game’s art direction.

343 Industries then published an official response to the criticism, telling fans it was taking the feedback “very seriously”.

The studio has now committed to providing “at least” monthly updates on the game’s progress, this new blog being the latest of these.

Woobie I reallllllly hope they get this game right man

I reallllllly hope they get this game right man

From the screenshots the game looks amazing!!