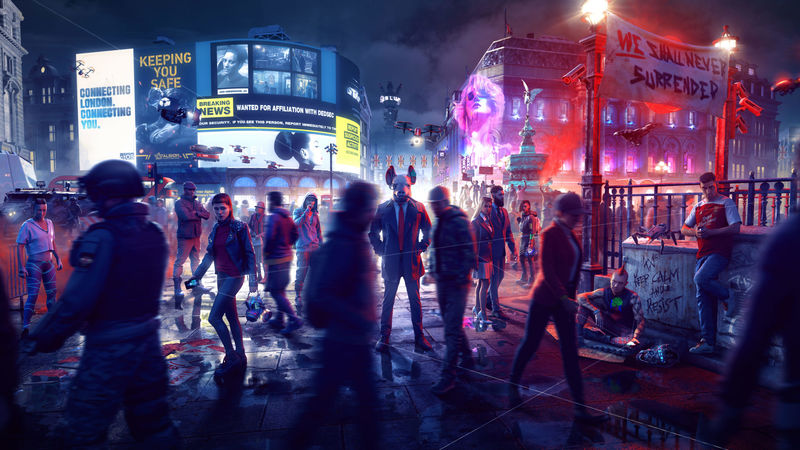 4
Watch Dogs Legion‘s delayed online multiplayer will be coming to Xbox, PlayStation, and PC in March now that the developer has squashed all those troublesome bugs.

Ubisoft has announced that the online mode for Watch Dogs Legion (which was delayed back in November 2020) will be available on March 9, and it will be free for all owners of the game via a free update on consoles and PC.

The main sell of the update is four new modes that will allow you to wreak havoc across the game’s interpretation of London, and you’ll be able to tackle the open-world in co-op, or engage with more challenging mission-based experiences in Tactical Ops.

Ubisoft was supposed to launch the London-based game’s multiplayer modes in a dedicated patch on December 3, but thanks to myriad issues with the game – including progression-related bugs that halt all progress in some versions of the release – the developer decided to push the patch into 2021.

As per a Ubisoft press release, here’s what you’ll be able to enjoy if you download and play the long-awaited update:

Free-roam open-world co-op where players can team up with their friends for up to four-players and explore London, encounter city events, complete challenges and participate in side activities.

New co-op missions for two-to-four players using new co-op gameplay mechanics and giving players the opportunity to recruit the perfect team and fight back against London threats across the most iconic landmarks of the city.

“Leader of the Pack,” the first four-player co-op Tactical Op which will require teamwork and efficiency. It’s made of five interconnected narrative missions which are endgame content, made for players who are seeking a challenge.

Players will need to strategise and communicate effectively with their teammates and ensure they have upgraded gadgets and recruited a strong cast of characters.

If you already have the game’s Season Pass, you will be able to access two new single-player missions starting on March 9, too. They are:

Guardian Protocol:
DedSec tracks an algorithm that could allow AI to override human decisions. If they don’t find it, it could be used to turn weaponized drones into autonomous executioners.

Not in Our Name:
A secret group is stealing DedSec’s name. Worse, they’re also stealing information so their employer, a ruthless tabloid owner, can use it to blackmail their victims.