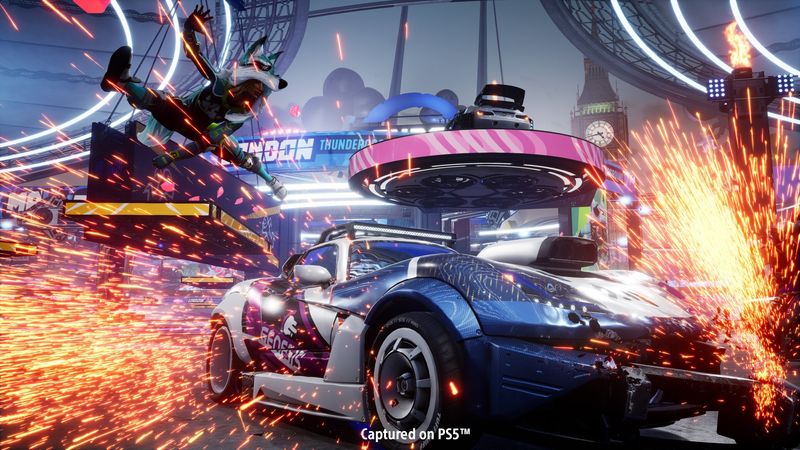 4.7
Voice chat is key in multiplayer games. It lets players communicate with each other, strategizing on how to win a match. Of course, it’s almost always used for trolling, but that’s besides the point. When it launched just a few days ago, Destruction AllStars came with voice chat features enabled by default. That’s not totally uncommon for games, of course. What did stand out though was that the game would default players microphone to the DualSense controller. You’d be able to hear every input from a player, or a baby crying in the next room. In short, it’s a headache. Thankfully, a hotfix for Destruction AllStars has come out to remedy the issue.

According to a post on Twitter from Destruction AllStars developer Lucid Games, the hotfix is part of a larger effort to work on the game’s voice communications system. For the time being though, voice chat in the game has been changed just a bit. By default, players no longer have hot mics in their controllers. Instead, multiplayer lobby voice communications are disabled by default now. This is great for anyone playing Destruction AllStars, no more worrying about hearing someone’s screams come through your controller.


Lucid Games is also “actively working on longer-term enhancements to the voice communications system,” although it’s not clear what steps the developer will take in the future. Besides changing voice chat settings, the recent hotfix also addresses “several client crashes relating to Multiplayer Lobbies and UI.”

Destruction AllStars was made available on February 2, but was, and still is, free for PlayStation Plus users. Our review of the game praises the arcade-y destruction derby title for its fun behind the wheel, although it’s lacking as soon as you’re flung out of your car.