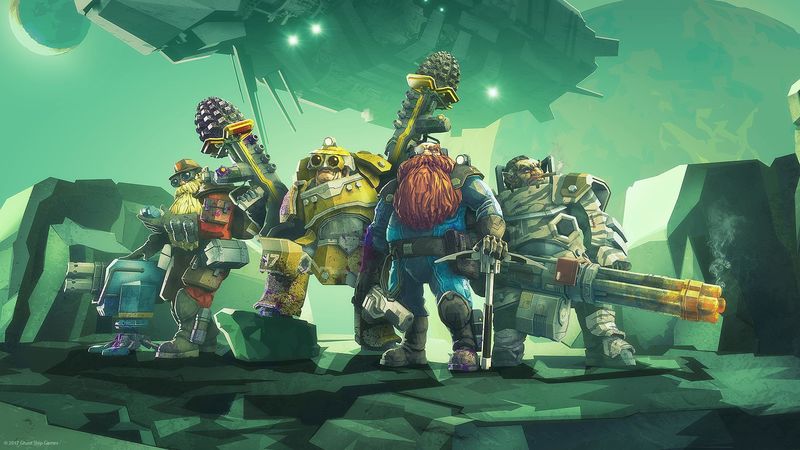 4.3
Deep Rock Galactic Update 33 is out now. It adds two new planetary regions for players to explore, several new enemies to encounter, and much more.

Deep Rock Galactic Update 33 is now live. The first update of 2021 brings tons of new stuff to the game, making it a great time for both new and old players to hop in. If you’re looking for a new multiplayer title to get into, this is one worth giving a second glance. Check out all the new stuff added in today below.

Two New Biomes: Azure Weald and Hollow Bough
Azure Weald is the first of the new biomes. The dazzling lichen clusters really make the area stand out from some of the other biomes already in the game. However, it’s important to remember that this is an otherworldly jungle. Expect to find quite a few baddies as you venture in.

Hollow Bough is equally interesting. You’re going into gigantic, hollowed-out trees; however, they’re being invaded by vine-like plants. Of course, they aren’t just coming for the trees. You’ll have to deal with them as well. Both biomes also come with their own set of Milestones for players to complete.

Mission Overhauls
Three different missions are getting overhauled. Elimination is getting two new Dreadnought variants that are going to change things up considerably. The team at Ghost Ship Games has also done some work to both Salvage and Point Extraction.

Salvage has a few of the bigger issues fixed. Namely, they’ve tweaked how locating mine m.u.l.e. legs work and done some updates to the fuel cells. In Point Extraction, they’ve updated the old model for Minehead to bring it up-to-date with everything else in the game.

New Enemies
Because we’re getting new biomes, we’re also getting new enemies. There are four different enemies in Deep Rock Galactic Update 33. They include the Mactera Tri-Jaw, Mactera Brundle, Deeptora Bough Wasp, and Stabber Vine. As you’d probably expect, they all sound super deadly, so make sure to watch yourself once you head down to explore.

Of course, this is just the tip of the iceberg. If you want to see the full patch notes, be sure to check them out on the official site. But if you’re just wanting to hop in, Deep Rock Galactic Update 33 is available now on PC. The Xbox version hits on February 11.