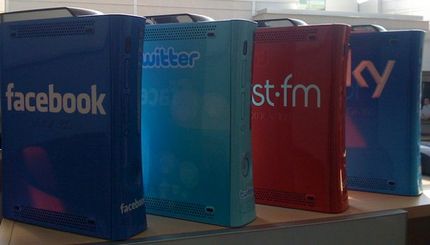 Microsoft's Major Nelson showed off several consoles that the company will be giving to its new partners, now being integrated into Xbox Live. The Major even noted that he may even "liberate" one and asked if anyone was with him. Um, yeah!
Also, theft is likely the only way to get your hands on one of these custom consoles (unless you've got a high-level insider at one of the involved companies). The Major makes sure to note, "To be VERY clear ... Those are special consoles made for our partners. They are not for sale anywhere." Hmm, five-finger discount it is.
While Griffith has his sights set on some 300 million Hero-less households, developer FreeStyleGames must be a bit more narrow-minded, lest DJ Hero come out as a cacophonous mashup. As mainstream as turntablists have become, they're still spinning for a variety of crowds. There's a difference between a game for everyone and a game with something for everyone. So it's simple then? All DJ Hero has to be is the greatest mixtape of all time.

I can't wait for these things to get integrated into XBL, especially Last.fm!