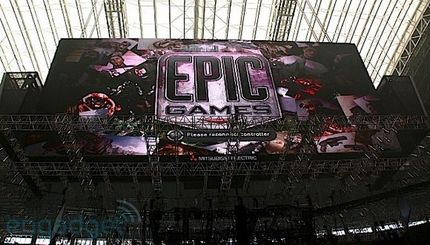 4.5
A tipster at Engadget snapped this shot from Gears of War 2's title screen, while waiting for a controller to be reconnected, on the enormendous 72 x 160-foot 'LED wall' at Dallas Cowboys Stadium late last week. It's reported that the stadium was being set up for the Jonas Brothers' June 20 concert, and the one piloting the system was none other than Steve 'SoneAF1015' Fatone, the group's video director. Even better, footage emerged on YouTube as well (seen after the break), showcasing the screen in action, though playing Halo 3 as opposed to Gears of War 2. Other shots drop presumably Mr. Fatone (pronounce that as you will) playing Call of Duty 2 and, erm, showing everyone his Gamercard, paltry Gamerscore in-tow. But alas, congrats to you, Mr. Fatone, you've likely just played the biggest game of Halo 3 ever.