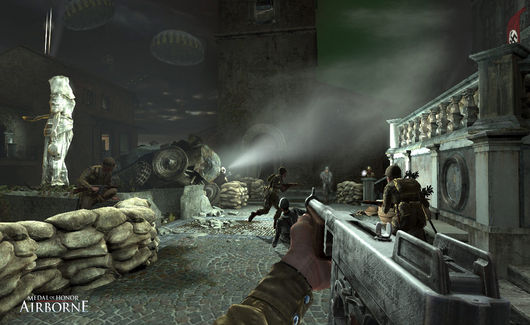 4.3
t's October's half-way point and just as announced, Microsoft has made available two additional games for Xbox Live Gold members. Arriving in the Games with Gold program today are Bulkhead Interactive's puzzle game, The Turing Test, for the Xbox One and EA's World War II FPS, Medal of Honor: Airborne, for the Xbox 360. Thanks to backward compatibility, the latter is also available on Xbox One consoles.

The Turing Test (Xbox One, October 16 - November 15)
The Turing Test is a first person puzzler that explores the phenomena of consciousness and challenges the meaning of human intuition. Take control of Ava Turing, an engineer for the International Space Agency (ISA), and progress through a narrated story of introspection and morality whilst uncovering the hidden mysteries of Europa. Delve into The Turing Test’s human interaction puzzles and arm yourself with logical and methodical thinking. Take on tests designed in such a way that only a human could solve them.

[b]Medal of Honor: Airborne (Xbox 360, October 16 - 31[
Take to the skies in Medal of Honor Airborne, where your choices will turn the tide of WWII. Starting with your jump from a C-47, every choice you make can seal your fate. In the air, control your parachute to select the landing spot that brings you the greatest strategic advantage. On the ground, explore the open, vertical environment for positions that will provide you a tactical edge against your enemies.
/b])

For anyone who missed it, Gone Home from the previous Games with Gold promotion is still available to claim until October 31 for Xbox One users. Also, keep in mind that only claimed Xbox 360 games will remain playable if the Gold subscription is discontinued, unlike claimed Xbox One games, which are only accessible with an active subscription.

"The Turing Test and MoHAirborne are now free with Xbox Games with Gold" :: Login/Create an Account :: 7 comments

I'll have to give Medal of Honor Airborne a try, always did like that game series.

MoH has such a weird controller scheme, found it a little hard to play.

Gonna give both games a try :)

The Turing Test isn't that bad, Its a lot of fun to be honest lol.

Will have to pick up Medal of Honor not sure about that other game tbh.