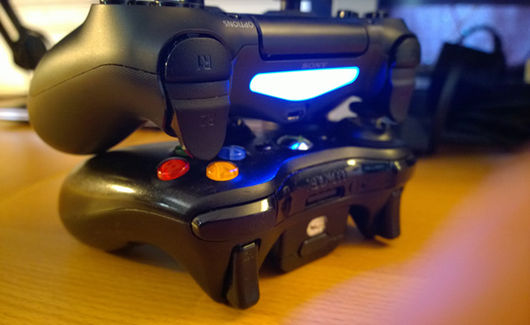 4.5
There are a lot of people out there that are arguing what the better console is – the Xbox One or the PlayStation 4. But a YouTube user by the name of Eddie Zarick has posed the question, “Why not both?”

Granted, not everyone can afford both, but Zarick has done the next best thing – he’s built a super-system that acts as an Xbox One and a PlayStation 4 in one collective unit. And it’s pretty cool how it operates.

Zarick is no stranger when it comes to building hybrid game systems, as he’s made Xbox and PlayStation-enabled laptops in the past. But this is the first time where he’s conveniently built two of the most popular game consoles into one – and it’s pretty neat.

The “XStation,” as he’s calling it, has a dual drive system in which a light turns on when there’s a particular part of the system running, with the left side lighting up with PlayStation 4 (in blue, natch) and the right side lighting up with Xbox One (in green). That assures you can’t run both at once, and switching between the two is kind of a piece of cake.

The “XStation” features a single internal power supply, and runs on a simply 2X1 HDMI switch, so you can go back and forth between the systems with fair ease. And the system was built using the Slim models of each of the consoles, making for a conveniently built model.

The video above highlights how the system works, and while there’s no real gameplay footage, you can get an idea of how it operates generally. And it really makes us want one, but it’s a one-of-a-kind unit that isn’t being planned for mass production. Maybe one day we can be savvy enough to build your own, but, for the time being, enjoy the clip above and dream a happy dream.

Oh, and maybe one day Zarick can go the extra mile and actually build a super-system that includes other tech. We’re talking a Nintendo Switch combined with a PC, so we have sort of a super-laptop. Wishful thinking, but you never know…

Looks like a great looking idea. Wish i could get me one of these

Will defiantly be picking one of these up for sure. Anyone know when they will be available to buy?

if only they mass sold something like this, it's a dope project

Not everyone can afford both, but he's done the next best thing, and has built a custom super-system from slim models of each and wtf am I reading this right??

This is really cool, If they were available to purchase I would definitely buy one.

YOOOO! If these are for sale i'd buy one for sure.

Man, that is cool. I remember seeing the laptop that he also created with an Xbox and Playstation. It must've been hard to get both motherboards into that small box, and keeping them cool. The fan sounded loud from the video, that wouldn't bother me too much. Too bad he isn't going to "mass-produce" any of these. Otherwise, I would purchase one. I like how it's simple, he mentioned the splitter inside, and you only have one power plug, but he never did mention a ethernet port. So would you only be able to connect through wireless? Both consoles also support the 2 usb ports on the front. It's pretty cool!!

Pop a clear case on that baby and you've got a buyer (me).