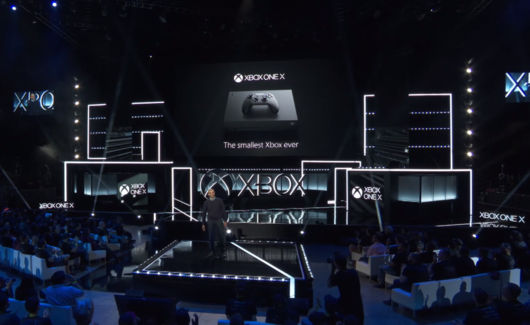 4.3
Today, during Microsoft’s E3 2017 press briefing, the house of Xbox revealed the price of the newly announced Xbox One X.

Xbox One X will be the “smallest Xbox console ever,” and comes with a lot of horsepower under its hood (at least for a console), including a CPU/GPU combo capable to deliver 6 teraFLOPS of computing power, 12 gigabytes of GDDR5 RAM, a one terabyte hard disk drive, and a 4K ultra HD Blu-ray disk driver. It’s said to be able to deliver true 4K games to the console space.

It’ll be certainly interesting to see how widely Xbox One X will be embraced by the audience, and whether the market will welcome and reward its combination between power and pricing or not.

$500 seems like a lot but for a console hits powerful, I think its a fair price in my opinion.

Kind of looks the same, if im playing 500 dollars i kind of want something a little more unique.

Will retail £399 for me which are cheap as hell for what your getting.

Certainly a price im 100% happy with, really seems it's worth it. The new cooling system as well as finally having fully 4K capability is perfect.

Cheaper than what I thought it would be, doubt I will get it this year but probably will try and pick it up some time in 2018. I presume there are no actual Xbox one x exclusive games so the normal Xbox one should run it

Will be getting this of course but not at release already own a 4k tv. I think Ill pass for the time being.

Like I said in the rumoured price it's not that bad, I was expecting 6-700s but 500 is affordable with abit of saving unless you work. Definitely be picking up one without a doubt

-Jord Is there any confirmation on what the UK price will be?

For what it is, I thought it would be higher than £450 tbh. Looking forward to getting it, hopefully day of release