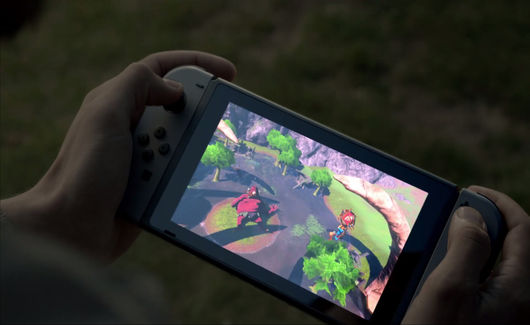 4.2
Nintendo have gone ahead and shared the specs for their upcoming Switch system- or, well, they have shared them the best Nintendo will ever share specs. The long and short of it is, this is an extremely impressive handheld, and a rather unimpressive console.

The Nintendo Switch will have a 720p capacitive touch screen that is 6.2 inches. It will play games in 1080p when it is docked. The Switch handheld itself uses USB-C connections to charge, which is a welcome change from Nintendo’s usual proprietary nonsense. The Switch comes with 32GB of memory, which is expandable by standard microSDHC or microSDXC cards. It supports 5.1 Dolby Surround, and features a custom Tegra processor powering it. Additionally, the system uses IEEE 802.11ac wireless standards, and can connect to up to eight Switch systems at once.

The cost of all this? The battery life, which can be as high as 6 and a half hours, but as low as 2 and a half hours, too. Which… would not be optimal when playing it as a handheld. The Nintendo Switch launches worldwide on March 3.

Some nice specs, still deciding if I should get one or not.

This is pretty solid for the price that they have combined with it's mobility and use outside of home!

The specs are decent but the battery life is a let down.

Some good information, I most likely won't use it as a handheld so I'm not too worked about it.

A lot of hype over this switch. I wouldn't mind giving it a try honestly I used to love Nintendo systems when I was younger(not wii). But everything seems so overpriced and have a bad feeling it'd all be a big waist of money. Maybe not for some people but for me it seems like it. Some pretty nice specs they have here so best of luck to them with their new system

Yippie. Could still careless lol, thing will flop like Wii U did.

Why does the battery life sound so bad.

It has some good specs but the battery isn't sounding too good.