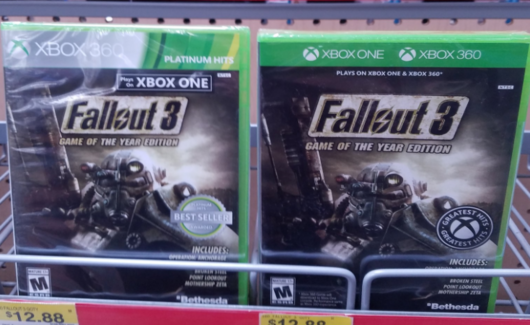 4.4
Xbox 360 games that work on Xbox One are being sold at retail in shiny new covers.

As you can see, the games are packaged in a new box, with their cover now clearly displaying the fact they’re playable on both Xbox 360 and Xbox One. In the case of Fallout 3, the version on the shelf offers the complete package (DLCs etc), and they appear to not be priced higher than the ones with the old cover.

This is probably just repackaging done by either Microsoft or Bethesda, since the discs included are identical, and both will be recognised by Xbox One for backwards compatibility. Still, it’s nice to let the general public know of the feature. Jay Why not just have XBOX? Rather than having 360 & One? Looks dumb

hadn't really thought about it, but it would look smoother if it said that

Why not just have XBOX? Rather than having 360 & One? Looks dumb

looks like they are selling the leftover copies lol

Not a bad idea, hope they do it

That's pretty cool, great idea and will save a lot of time for people looking at games that are compatible with the Xbox one

That's pretty cool, can't wait to see this in stores.

That's cool to hear, not a fan of the game just saying. Wish they did something over on the PS4/PS3

This is amazing and way easier, Nice move Microsoft.

This is pretty cool to show how Microsoft still cares about it's gamers.

It's interesting their reprinting them. I figured there were already warehouses of these lying around. Maybe they just reprint the labels and they did actually already have the games lying around?