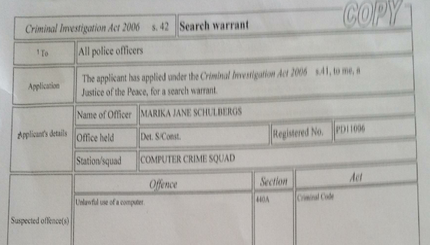 4.5
On February 19th between 7:10-12:30 +8GMT, SuperDaE was busy with a house full of unwanted guests. During this 5 hour Australian household raid, DaE was forced to follow them around his house as he watched them scavenge everything technology based in his possession.

Storming into his house was 8 Police Officers, followed by one single FBI Agent. Due to suspected server breaches, multiple counts of unauthorized server access and misuse of a computer. The companies who filed these complaints were Microsoft, Epic Games, Blizzard, Valve and Sony. DaE went on to say "Yo, everyone at this point just wants a piece of me".

The raid was conducted by local law enforcement with assistance from the FBI into the home of an Australian citizen. This clearly brings up recent memories of the iconic megaupload related raid into the home New Zealand resident Kim Dotcom by the FBI.

Everything from old unused computers, to a cellphone with a specific number was taken from his house. In a world where technology is everything, they left him stranded with nothing. They even froze his bank accounts. Multiple hours after the raid happened, DaE headed into a nearby town where he accessed a computer at an Apple Store. During his time on this computer he went onto an extremely popular site, Twitter. He sent out a few tweets about the raid, which can be found below.

If convicted SuperDaE is looking at 20+ years with a possible consecutive life sentence. It is extremely unbelievable that "Misuse of a computer" can land you more jail time than a "Manslaughter" charge.

We thank you DaE for sitting down with us to get this story right and wish you the best of luck in your future.

Here is a more fitted image of the warrant that was executed at SuperDaE's residence yesterday morning: UPDATE:
theverge.com did a follow up on our story:

"A West Australian Police spokesperson refused to discuss the case, but noted "if he wants to tell the world that Police have been investigating him over stolen property that is his choice," while refusing to confirm details about the individual involved.

Microsoft's apparent involvement in the case would appear to suggest that the material and alleged Durango development kit are genuine. The Verge reached out to Microsoft for comment on the raid, but a spokesperson says the company doesn't "have anything to share on this topic."

We all know Microsoft had part in this

what is this? lol

His fault entirely, can't say I feel bad for him.

Some would though, sad but true :/

Didn't he get like 22 years just for having the devkit though??

Wow that's crazy that many years?!

Didn't he get like 22 years just for having the devkit though??